“A concert in the egg,” Jerome Bosch – a description of the picture 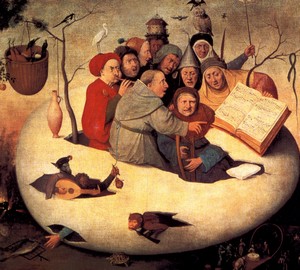 There are many cracks in the egg, in one of which ten people are sitting. They seem to form an egg yolk, which in the Netherlands is traditionally associated with stupidity. Why there are ten people can be explained differently: they can symbolize both different types of madness and God’s commandments. The first option is most likely, since there are several more signs in the picture that refer to stupidity, madness and evil. For example, a funnel on the musician’s head with glasses is a sign of charlatanism or alchemy, which Bosch condemned.

In another crack, a devilish kind of luteur and a dark-skinned man is visible that steals the wallet from one of the musicians. Other symbols of evil in the picture: owl, ravens, monkey and instrumental music (the attitude of Bosch to music can also be judged by the triptych “Garden of Earthly Pleasures”).

In addition to the main plot, there are many more small details in the picture. On the lower left side of the picture, a human hand appears from the crack, which tries to get fish, while a cat is watching what is happening. To the left is a hell of a fire. On the right below are small figures of people. It is already more difficult to explain the meaning of these scenes, because in Dutch painting there are practically no examples of such symbols. It is possible, so Bosch conveyed the complex process of obtaining a philosopher’s stone in alchemy.

Another mystery associated with this work is the issue of authorship. Art historians, having studied the picture, noticed that the notes in the book are the song of the Franco-Flemish composer Thomas Crekyon, which was published almost half a century after the death of Bosch. On the other hand, the ink drawing belonging to Bosch has been preserved. Most likely, the “Egg Concert” was written by one of the artist’s followers, or the original work of Bosch was redone.