“A luxurious still life with a parrot,” Jan Davids de Hem- a description of the picture 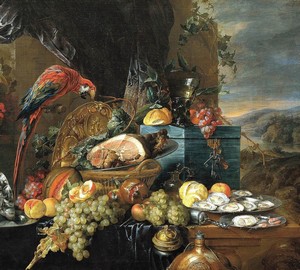 Luxurious still life with a parrot – Jan Davids de Hem. Oil on canvas. 150.5 x 116.2
The canvas depicts a table with various dishes: many grape clusters, fruits and meat lie in vases, on trays, or simply on a black tablecloth. In the center of the picture is a parrot, namely a red ara.

Paying attention to the background, you can notice the peculiarity characteristic of the Dutch still life: the table is located in front of the dilapidated wall, and in the distance you can see a landscape with hills and a river. A similar contrast between the front and back plans, the artist softens the dark fabric that covers the wall.

The picture belongs to the genre of luxurious still life, which during the time of life de Hema was especially popular. Its essence lies in the image of various fruits and other expensive food, jewelry from precious metals and stones, chic fabrics and other luxury goods. Painters using such symbols reflected human vices: vanity, excessive landing, the desire for base pleasures. In this, a luxurious still life intersects with another genre – vanitas, or “the bustle of van”, which even more clearly expresses this message.

In the picture of de Hem, the features of vanitas are reflected in deliberately casually depicted objects: overturned salt shaker, vase and glass on the right and left sides, respectively.

Parrot is also an important symbol. On still lifes, it is usually depicted for contrast with surrounding objects, being the only living element among the “dead nature.”. However, it symbolizes abundance and wealth.

The idea of the futility of worldly life is also emphasized by flutes and books depicted next to a overturned vase – symbols of science, creativity and spiritual exaltation.