“A messenger with a letter,” Peter de Hoch, describes the picture 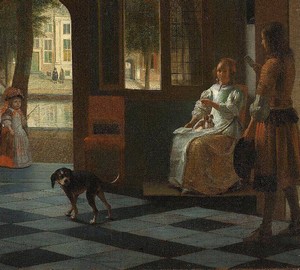 The messenger with the letter is Peter de Hoch. Oil on canvas. 68 x 59 cm

A picture of the late period of Peter de Hoch’s work. After moving to Amsterdam, the characters and interiors of the paintings change. Now these are wealthy citizens, rich mansions and luxurious interiors.

Spacious hallway of a large house. High ceilings. Large stained glass windows in two rows give a lot of light, despite the fact that the house stands on the shadow side of the street. The walls are decorated with paintings. Black and white tiles on the floor sparkle with cleanliness.

Attention is attracted by a young woman sitting on a pedestal. The light from the open sash of the window and the opened door illuminates its snow-white shirt with lace, shines on a golden skirt of dense silk, with mother-of-pearl overflowing on a pale green corsage. A large pearl earring carefully prescribed by the painter flickers. On the girl’s lap a small room dog comfortably settled, indifferently watching what was happening. The girl is calm and serene, but the question is read in her eyes.

She looks at the letter, not at the young man holding out a message to her. But this is not an ordinary servant. His clothes are made of expensive brick fabric, finished with black lace and metal buttons. On the legs are dandy boots with gags. The second dog looks around involuntarily, she is ready to snorkel at the young man at any moment.

Another bright spot in the picture is an open door to the street. Near her on a tiled sidewalk is a little girl. She is very dressed – she has an expensive orange dress with golden lace, a hat with feathers. In the hands of the girl holds a fishing rod. Apparently, the family was going for a walk. The baby is calmly standing and waiting, but a mischievous look gives out a cheerful and lively disposition.

The painter again uses his favorite technique – a cross-cutting look deep into the picture. Through the open arched door, a channel is visible and the sunlit houses on the opposite side. High trees with lush leaves outside the windows form the second arch. In the house opposite is the third arch, which allows you to see the next street. Thanks to this technique, the master expands the space, creates a perspective, gives the image depth.

The picture has a lot of air, cold light. Dark, muffled colors are used to write the interior. The chamber is composed of a variety of gray, blue, brown, black shades and halftones.

Pete de Hoch with amazing skill creates an atmosphere of peace, home comfort and leisurely life characteristic of his work.