“A self portrait in clothes finished with fur,” Albrecht Durer – overview 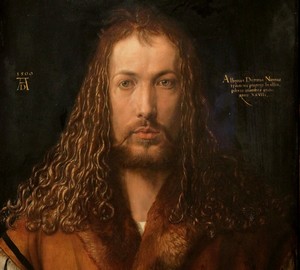 Self portrait in clothes finished with fur – Albrecht Durer. Wood, butter. 67 x 49 cm
The end of the XV – the beginning of the XVI centuries is characterized in the work of Albrecht Dührer by the appearance of three large self-portraits: one for the bride, the second for the image of his own status, and the third, most scandalous and cult, for “the eternal capture of himself with non-aging colors.”.

“A self portrait in clothes finished with fur” or simply “Auto portrait at the age of 28” is one of the most recognizable works of the artist. It was made on the board with oil in early 1500.

Against the background of the first two self-portraits, made in a classic light manner, this one immediately surprises with its gloom, mystery and connection with religious subjects.

Albrecht Durer depicted himself on a dark background surrounded by two soaring inscriptions: initials – on the left side, phrase (per.) – “I, Albrecht Durer from Nuremberg, portrayed myself in eternal colors at the age of twenty-eight” – on the right.

Only two bright spots stand out in the picture – the face and right hand of the artist, raised to the collar of clothes and, as it were, folded in the gesture of blessing. The color scheme of the work is muffled. The composition of the picture is unique because it is frontal. At the beginning of the sixteenth century, such compositions were associated exclusively with religious painting, primarily with the image of Jesus Christ. Albrecht Durer became the first artist to portray himself in a hyphen.

Art historian Marcel Brion believes that initially Durer was going to write a portrait of Christ, but at the last moment he remade it for himself. The resemblance to Jesus is obvious: dark long hair (on all previous portraits, the master portrayed himself with a Russo-red hue), a beard, a hand folded in the gesture of blessing, and a detached but spiritualized face – all this is very similar to the image of the Savior.

But was it a conscious insolence on the part of the artist? Hardly. Given the fact that Albrecht Durer was a zealous Christian, the message of the picture is rather close to the teachings of the Apostle Paul: “…Referred to Christ will be an honor. ”.

Until the death of the artist, the portrait was at his house, and after that it was purchased by the Nuremberg City Hall. Since 1805, the work has been stored in the Munich Pinakothek.