“A woman washing her hands,” Gerard Terborh – a description of the picture 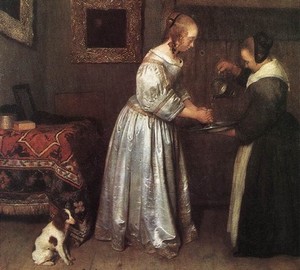 Gerard Terborh is an outstanding master of genre painting of the Dutch school of the 17th century. At the beginning of his career, he wrote mainly scenes from peasant life and soldiers, and since the late 1640s he began to specialize in scenes in interiors with a small number of actors – as a rule, these were couples, ladies for reading, writing and music. It is possible that the lady depicted here is the artist’s sister.

The artist lived in need, this explains the fact that as models he used a narrow circle of close people, in particular Sister Gezin. Most likely, it is she who is represented in the picture “Woman washing her hands.”.

Usually, such stories are interpreted by researchers as an allegory of dissolute life, but in this case the content of the work probably represents an allegory of virtue. Its symbols are a drawn bed (in many other canvases he is spread) washing hands with a lady (since the trial of Christ Pontius Pilate, this gesture symbolizes the reluctance to participate in something reprehensible) lack of jewelry on the table (in other similar scenes near Terborh itself, such jewelry is “read” as payment for love comfort) and, at last, dog, protecting the peace of mind of the mistress.

A vivid illustration of the meaning of the animal symbol is the painting by Jan van Eyck “Portrait of the Arnolfini Piles”, stored in the National Gallery in London.

From a picturesque point of view, Terborh proved to be an unrivaled master of the transmission of matter, in particular white satin (girlfriend’s dress) and multi-colored tablecloths.