“A Woman Weighing Pearls,” Jan Vermeer – a description of the picture 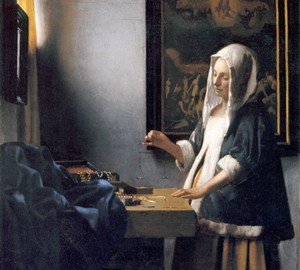 Dutchman Vermeer is one of the most mysterious painters in the history of European art, mentioned only three times in lifetime documents. He is credited with about 40 paintings, most of which he did not sell or chose to keep at home. Vermeer was a “master of silence,” he could catch and capture the moment when all actions were suspended.

This canvas is an allegory of equilibrium. The heroine is full of inner peace and concentration. Caution, so as not to upset the balance, it holds the scales in its right hand, and with the left rests on the table lid. The image of the “Past Judgment” in the picture behind the model is hardly distinguishable. This apocalyptic scene echoes the actions of a woman. At the Last Judgment, Christ will separate good from evil, righteous from sinners, and all earthly values will seem insignificant. A woman weighs her wealth, and Christ is human souls. It was incredibly difficult to achieve symmetry and balanced composition, coordination of details and tone relations – it is clear why Vermeer worked on each picture for so long and hard. His creations were valued not so much for content as for form. He knew how to portray objects as they exist in life, as a person sees them, without focusing on something specific, but perceiving in general.