Above the city, Mark Zakharovich Shagal 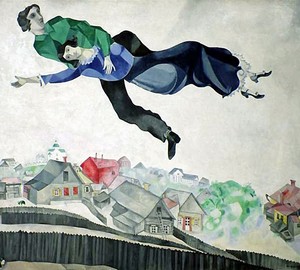 Unreasonably distant and so close, mysterious and completely understandable on a sensual level, Mark Chagall is the only one who managed to visually portray the pompous expression “to fly away from happiness”.

Work on the picture “Over the City” began back in 1914, and the master made the last touches only in 1918. During this time, Bella from her beloved turned not only into a beloved spouse, but also the mother of their daughter Ida, forever becoming the main muse of the painter. The union of the rich daughter of a hereditary jeweler and a simple Jewish youth, whose father earned a living by unloading herring, otherwise you won’t call mezalian, but love was stronger and overcame all conventions. It was this love that inspired them, ascending to heaven.

Karina immediately depicts two Chagall loves – Bella and dear heart of Vitebsk. Streets are presented in the form of houses separated by a high dark fence. Not immediately will the viewer notice the goat grazing on the left side of the center of the picture, and a simple man with his pants down in the foreground – a humor from a painter, breaking out of the general context and romantic mood of work, but this is all Chagall …

The image of people looks very curious – it is some kind of “cubized”, angular, consisting of even clear lines, but, on the contrary, it is expressed in completely soft outlines not without grace and softness. In addition, Bella is dressed smartly – a beautiful bright dress, neat shoes, however, lace peering from under her skirt, indicate that Chagall wanted to emphasize how homemade, her own, only him.

Many critics note the hero’s head turn – he looks back at his native Vitebsk, as if trying for the last time to grasp a familiar landscape. Indeed, the painter will very soon leave the country, and after all Europe in general, fleeing the Nazi persecutors who aimed at exterminating the people of Bella and Mark.

The composition of the work is incredibly harmonious, and the lyrical mood allows you to get rid of questions – why are these young people suddenly flying. The amazing power of talent allows the viewer to step over these conventions and just admire the picture.

They say that even in her youth the gypsy guessed Shagalu that he would have three women in his life, and two of them would be ordinary, but here is one completely unusual. With his extraordinary Belle, great love and main inspirer, Chagall and dedicated this work, like many others.