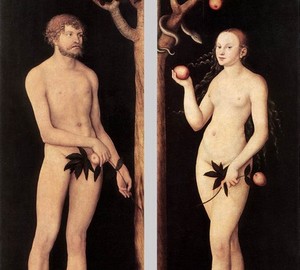 Already in 1508-1510, Kranakh developed an artistic scheme to embody the plot of temptation, which gave him, like other Renaissance artists, the opportunity to legally, without fear of condemnation from the Church, portray male and female figures naked.

The paintings on this subject are based on a biblical story about how Adam and Eve tasted the forbidden fruit. Kranakh has a tree – always an apple tree, although other painters may have figs. The master created about 50 images of this plot, they are stored in galleries in London, Berlin, Prague, Antwerp. In the early versions, as well as in the Dresden, only the biblical participants of the scene – Adam, Eve and Zmiy, later include animals created by God to man. However, compositely all these versions are similar: often the Tree divides the composition into two equal parts, and sometimes, as in this case, these are also two boards.