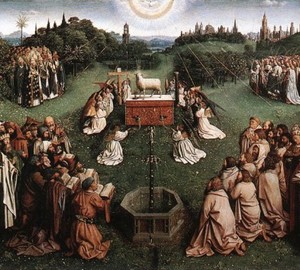 The Great Altar in St. The bavona in Ghent was started by Hubert van Eyck (d. in 1426) and completed in 1432. his younger brother Jan. On the central panel we see large groups of people gathered under the radiance of the Holy Spirit to worship Christ, who appears in the guise of the Divine Lamb on the central altar surrounded by angels and tools of the Passion of Christ. In the foreground of the picture is a fountain serving as an allusion to the promise made in the Revelation of John the Evangelist that all thirsty will receive water from the well of life.

Ian van Eik was associated with a high culture that flourished at the court of the Dukes of Burgundy in the early 1400s.; his careful attention to detail recalls the miniatures in the Burgundy “The Magnificent Sentinel of the Duke of Berry”, performed in the cosmopolitan style at about the same time. But in the landscape, which opens in the background of the picture, with rocks and distant blue hills, the features of realism are already visible and the use of the artistic perspective characteristic of the painting of the High Renaissance is planned.

AGNEC. In the Old Testament, the lamb, or lamb, was often sacrificed to God; in early Christian and medieval art symbolized the Passion of Christ and Christ the Resurrection. When depicting the first plot, sometimes the blood of a lamb flowed into the rub (cup); in paintings dedicated to the second plot, the lamb could hold a roundabout with the image of a red cross on a white background. The attribute of John the Baptist is the lamb – allusion to what he called Christ “the Lamb of God”, taking upon himself the sin of the world.

The lamb can also symbolize the flock of Christ’s followers under the protection of a good shepherd, such as the ancient Christian mosaic of the mausoleum of Galla Placidia in Ravenna.