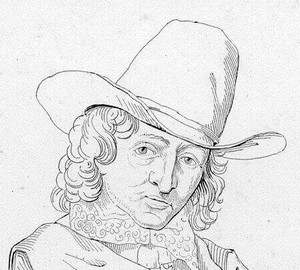 Perhaps the Golden age of Dutch painting got its name not only because it gave the world the great painters Rembrandt, Vermeer, Frans Hals, Pieter de Hooch and others, but thanks to the emergence of the so-called “small Dutch”. “Small” they are not the talent, but in small intimate pictures, which enjoyed great popularity among the local population.

One of the “small Dutch” and is Adrian van Ostade. He was born in Dec 1610 in the city of Haarlem, in the family of ordinary artisan. But, nevertheless, of the three sons, two became artists – Adrian and Isaac.

At 24, Adrian comes to the artist community of the city of Haarlem. In 1657 he married. In 1662, became the head of the Guild of artists. That’s the main milestones in the life of Hadrian. But the creative way it is much richer and more interesting.

Adrian was fortunate to study at the famous Frans Hals. Almost 30 years, he imitates him and draws pictures in his manner. Also influenced by the masterpieces of Rembrandt, Adrian begins to pay attention to the image of light and shadow, this important component in painting, through which people’s emotions become more alive and more expressive. But it will be later.

And while the initial period of creativity Adriaen van Ostade is characterized by small genre pictures of the life of the common people. Figures of peasants, shopkeepers, dancers, drunks, players, and other inhabitants, the artist draws a very clear contours, and the images are slightly sharp, but colorful.

The brush of the artist come out very interesting genre scenes with humor, sometimes with biting sarcasm, with the knowledge of the habits and customs of the local population. It is necessary to consider his paintings, such as “Quarrel”, “Carousing peasants in a tavern”, “Fight”, “Peasant in red beret Smoking a pipe” and it is easy to represent the mores of the time.

Gradually the work of Hadrian acquire the warmth and softness, sophisticated equipment, flying brush is free, become more elaborate plots and composite construction. In the pictures also has humor and smiles.

This second stage of the already established painter marked by such paintings as “Wandering musician”, “the Farmer pays the debt”, “Happy farmers” and many other well-made works.

About 1649 Adriaen van Ostade was a Mature artist, with plenty of work and a recognizable style. The plots are almost the same as before – life and the life of people, but the execution of the paintings becomes all shiny and virtuosity: “family Portrait”, “the Alchemist”, “Interior of a tavern with peasants drinking beneath a window” “Village hotel”, “Courtyard cottage”, “Village Fiddler”, the “Teacher”. And he paints a lot of portraits.

His magnificent self-portrait, written in 1663 – “the artist.” As the author wonderfully conveys the General mood of the creative person, absorbed in love. Daylight penetrates through the openwork mosaic and soft rays illuminated the workshop, various objects and working place of the Creator. All filled with warmth and harmony.

Died Adriaen van Ostade on 75 year of his life in Haarlem, in the city of which he had never left. But this did not prevent him to become an artist of world renown.

Due to the fact that his works were like the Russian Tsar Peter I, the paintings of the Dutchman appeared in the Hermitage in St. Petersburg. Also, these small-format picture went around the world – museums in Vienna, Munich, the Hague, Paris and even Penza can be proud that in their arsenals is the work of Adriaen van Ostade.

The pattern is simple, sometimes naive, but such a characteristic, cheerful, lively, with dancing, fighting, walking or running simple village people.