After the Kulikovo battle, Serov 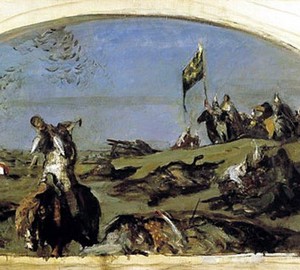 After the Kulikovo battle – Valentin Aleksandrovich Serov. Oil on canvas. 52×99
This work was not completed by the artist. Before us is a sketch, an idea, a idea. Judging by the form, conceived as a wall paintings, the picture “After the Battle of Kulikov” is saturated with an atmosphere of sorrow and silence that came after the bloody battle.

In the foreground is a warrior on a horse. He trumpets his horn loudly, announcing victory, gathering the survivors. Around him is death, in all its disgusting essence. Corpses of horses, dark figures of monks roam in search of semi-living.

Above all this is the army of Dmitry Donsky, looking around the swear field. The banners are deployed, the figure of the prince is clearly visible among the soldiers.

And from heaven a black cloud falls to the ground a flock of ravens who smelled death. There is no glee, there is no sense of great victory, only bitter regret for those killed in the great battle, which will bring Moscow the long-awaited liberation from the humiliating dependence of the Golden Horde.