“After the massacre of Igor Svyatoslavich with the Polovtsev,” Vasnetsov – overview of the painting 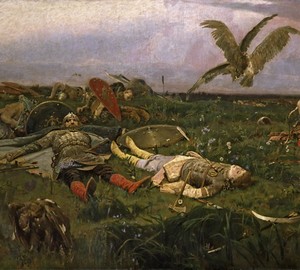 After the battle of Igor Svyatoslavich with the Polovtsev – Viktor Mikhailovich Vastnetsov. Oil on canvas. 205 x 390 cm

The outcome of the terrible battle with the Polovtsev is the plot of the painting by Vasnetsov. The field is strewn with corpses. Fate spared neither an experienced warrior nor a young man whose life was interrupted by a Polovtsian arrow. They lie nearby, affected by wild Polovtsi.

Above dead bodies seized in a fight vultures. They continue what people have already finished. A pink moon rises above the field. It seems to reflect the bloody battlefield. Soon, a dead field will cover the night. The battle is over.

Nature in the picture is opposed to the plot. If people are death, then nature around is full of life.

Showing one of the most important events of Russian history, Vasnetsov is famous for brave Russian soldiers, their feat is singing. The artist depicted much more dead bodies of the Rusichs.

Indeed, the battle ended in the victory of the nomads. But Vasnetsov does not make despondency or sorrow in the plot, he inspires optimism and pride in the past of his country, his people.

Vasnetsov – a romantic, a poet in painting – managed to create a canvas capable of fostering patriotic feelings of the viewer.