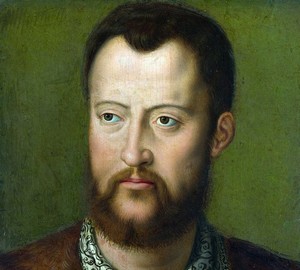 The famous Italian artist known as Bronzino, a recognized master of mannerism, was born in 1503 in Florence, capital of Tuscany. The true name of the master Agnolo di Cosimo di Mariano. He was a native of the environment of the educated intelligentsia, had a great knowledge in literature, read a lot and was familiar with the works of Dante and Petrarch, who were his contemporaries and compatriots. Bronzino was a member of the Florentine Academy, we also know that he successfully wrote poetry.

As a student Raffaellino del Garbo and Jacopo Pontormo, the artist embraced their style, its masterfully reinterpreted and improved. As a result, Bronzino became one of the most prominent representatives of the trend called mannerism. Paintings in this style are often characterized by bizarre composition, complexity of work, the pretentious lines and rich colors. Being early Baroque, mannerism carries some of his traits that is clearly reflected in the formal portraits and multi-figure compositions on ancient and religious themes.

The artist created murals, paintings for altarpieces and decoration of churches and monasteries, paintings on mythological, allegoric and religious themes. But the best that was created by Bronzino and that was the object of his pride and glory — portraits. They seem to be very well thought-out composition, delicacy of drawing, richness of cool colors and an abundance of precisely drawn details.

At the age of 27 he was invited to serve as court painter under Duke of Urbino. He was one of the masters employed in the large-scale work at the Villa Imperiale in Pesaro, located in the historic province of Le Marche, in Eastern Italy. Here for Guidobaldo II, he painted “the Contest of Apollo and Marsyas”, a portrait of the Duke himself. As a result, these two paintings became the basis for a flourishing career Bronzino, creating him the reputation of a skilled and talented painter.

At the age of 30 years, the artist leaves Urbino and becomes court painter to the Medici in Florence. Here the focus of all intellectual and artistic elite of the then Tuscan. Four years later he became a member of the Guild of Saint Luke (Luke is regarded as an artist and patron of the arts, it was named after the Guild of master craftsmen in medieval and Renaissance Europe) and entered the Academy of Florence.

Master went for a short time in Rome and Pisa. During his travels he was able to see works by great Renaissance masters, particularly Michelangelo, taking a lot from his work. The rest of his life was entirely devoted to his native Florence.

Bronzino worked a lot with the frescoes, he owns a number of well-known paintings, such as the chapel of Eleonora of Toledo in Palazzo Vecchio. In his lifetime he has created many theatrical and party decorations, as well as the cartoons for the creation tapestries. Most of these works because of the nature of the material had not reached our days, but at the tapestry designs were created works by other famous masters of Europe.

One of the allegorical paintings by Bronzino, “Allegory of love”, went a gift to the king of France Francis I. It shows how valued the work of the master is a spoiled talented artists of the Florentine Duke Cosimo de ‘ Medici. During these years, Bronzino has written many other allegorical paintings by order of the Duke, and numerous altar image for churches in the city.

His nephew Alessandro, too, became an artist, a representative of the school of mannerism. He was strongly influenced by the art of Michelangelo, his religious and mythological paintings a little bluff in form and color, but the portraits, like my uncle, are soft and picturesqueness. Interestingly, the nephew is often also called themselves the nickname uncle, but has not reached a level of fame and glory, as he himself Bronzino. In the portraits painted by Agnolo feel the beating of the life and soul of the model, with all the restraint and some coldness of the composition.

The artist died in 1563 and was modestly buried under the great stone with the epitaph “never dies the one who lived as Il Bronzino”.