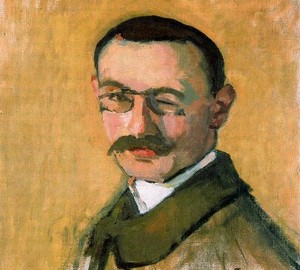 This French artist is a recognized master of landscape, although during his life he created numerous works in other genres — portraiture and the Nude – picture Nudes. Despite the fact that these works also have high skill and quality of performance, it is the landscapes “touch the soul” with its lyrical mood and prose of objects. Painting artless simple and very attractive in the eyes of the public.

Birthplace of the talented artist in the family, completely far from the art — his father was a clerk on the railroad. His birthday falls on 27 March 1875, the event took place in Bordeaux, France.

Love albert to painting resulted in the training in the class of Gustave Moreau at the école des Beaux arts in Paris. French capital in those days was the center of art, a melting pot of new trends and directions.

Initially the marches belonged to the fauves, maintained a friendly relationship with Derain and Matisse were exhibited in 1905 and 1906. But pretty soon wild experiments with color and form have ceased to interest him, and he went to, he liked the most — subtle color harmonies, the charm of nature. He really paid much attention to different environmental conditions, representing rain, fog, winter, with his strange, wavering gray haze in the air.

Since 1919, the artist lived in small towns, the historical region of Ile-de-France, surrounding Paris. In search of nature have made long journeys, and political beliefs led him even to the Soviet Union, where he visited in 1934. The artist has taken a proactive stance during the Second World War, he participated in the Resistance movement, while staying in Algeria.

In the postwar period the political faith of the marches made him a member of the Communist party of France. Until the end of his life he remained true to his beliefs — both in public life and in art.

Albert Marquet preferred to paint landscapes associated with the water — image of the Seine river, seaside, coasts and harbours. Another great love of the artist — the streets, squares and parks. Visual methods the brand can be called a miser, even a meager and simple, however, pictures make a strong impression. I sense the hand of a master, confident, able to reproduce reality, seen through the prism of your soul.

Landscapes by albert Marquet usually do not depict any monumental objects. This is the usual places, plots, city blocks, groups of trees, the streets — everything that surrounds us every day, something that we mostly don’t pay attention.
Probably needed the genius of albert Marquet, to make us stop and appreciate the moment captured in eternity canvas and paints.