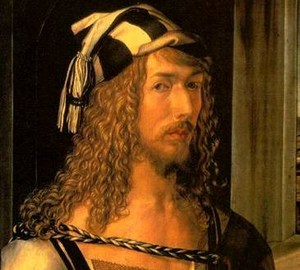 May 21, 1471 in Nuremberg-born Albrecht Durer. In the family the Dürer had 18 children (Albrecht was born the third). His father was a goldsmith, and so from early childhood, he helped his father in the jewelry business. The artist’s talent manifested Albrecht quickly, and his father accepted that the child will not be a jeweler. Therefore, dürer gave to the disciples Michael Wolgemut (local artist).

Wohlgemuth was reputed to be not only a good artist but also a great master of engraving, which had fully mastered his disciple.

The end of the training dürer

In 1490 training of Albrecht dürer ended and he wrote his first picture this year – “Portrait of father”. The next 4 years, the young artist spent traveling around Europe to see how people live, gain new experiences.

In 1492 dürer was in Colmar, where at that time lived the famous painter Martin Schongauer. But dürer never had to meet Martin, as he died a year before the arrival of Albrecht. But Durer was acquainted with one of the brothers Schongauer, who invited him to Basel. In Basel, he met many famous works, besides brother Schongauer had his jewelry workshop, so they found a common language.

In 1493 dürer was in Strasbourg. That’s where Albrecht received a letter from his father, who agreed his son’s marriage “in absentia”. Such marriages often happened at the time.

The marriage of dürer with Agnes

On 7 July, he married the daughter of a famous physician Agnes Frey. The fact that the marriage was not very happy, not surprising, but they lived together until death. In 1495 dürer even painted a portrait of his wife, “my Agnes.” Wife was interested in completely different things, but not art and culture, so they are not always found compromises. Children they had.

Truly, he became known on his arrival from Italy in 1494, where he stayed for six months. The first success has brought him wood and copper engravings, which came in a huge number of copies. Soon, he became known outside of Germany.

He went to Italy again in 1505, Durer took with honors, including 75-year-old Giovanni Bellini. In Venice, Albrecht dürer was performed for the German Church of San Bartolomeo altarpiece called “the feast of the rosary.”

Dürer’s fame grew with each passing year. His work has been recognized and very respected. In 1507 he returned home, and in 1509 bought a huge house, which survived until our days. It is now a dürer Museum.

In 1512 in winter, Nuremberg was visited by the Holy Roman Emperor Maximilian I. And by that time Albrecht dürer had painted two portraits of his predecessors on the throne of Maximilian. The Emperor loved these portraits, and he immediately ordered dürer and his portrait, but to pay him I couldn’t. So ordered the Nuremberg Treasury every year to pay the artist a substantial premium.

After the death of Maximilian in 1519 dürer ceased to pay the premium. Traveling in 1520 to the new Emperor Charles V, dürer tried to restore justice, and he succeeded.

At the very end of his trip, he contracted malaria, from which he died in 1528 in Nuremberg on 6 April.