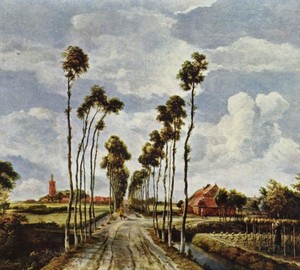 Alley in Middelharnis – Mayndert Hobbem. Oil on canvas. 141 x 104 cm
“Alley in Middelharnis” is a landscape of the Dutch painter Mayndert Hobbema, created in 1689. For a long time it was believed that the artist ceased his creative activity back in the 1670s due to his difficult financial situation, however, it was in recent years of work that he created his best paintings, and “Alley” is one of them.

This landscape is extremely atypical for Hobbema’s work: it rarely portrayed the city, preferring the village nature. Perhaps this was the reason that the picture gained worldwide fame.

The canvas depicts a road leading to the Dutch town of Middelharnis. High trees with small crowns grow along the edges of the alley, the city itself (church bell tower on the left and fishing port on the right) and a blue sky with white clouds are visible against the background. Closer to the horizon you can see a hunter with a dog and a gun.

The symmetrical composition of the picture is especially interesting: the alley is located right in the middle of the canvas, so the look of the beholder inevitably rushes into the distance, where, thanks to the future, the trees converge, as if connecting the sky and the earth.

In 1980, using an X-ray study, it was found that initially there were more trees on each side of the alley, but Hobbem painted them so that they did not cover the details of the background.

“Alea in Middelharnis” is considered the best picture in the work of the Dutch landscape painter. She is constantly being reproduced, so it may seem that the artist has no other work. However, despite all the atypical nature of the canvas, he has emotions and feelings characteristic of Hobbema, such as cheerfulness and peace. Here, as in many of his other works, the artist emphasizes the beauty of the harmonious union of nature and the world created by man.