“Alegory of Vision”, Jan Braigel the Elder – a description of the picture 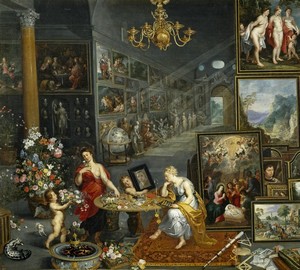 The Allegoria of Vision is Jan Braigel the Elder (Velvet). Oil on canvas. 65×109

Flemish painter and engraver Jan Braigel belongs to the dynasty of artists, the founder of which was his father Peter Braigel the Elder. The master was alien to narrow specialization, so he worked in almost all genres: he created still lifes, landscapes, battle scenes, mythological, allegorical and religious plots, and also depicted art galleries and animals.

The Allegoria of Vision canvas captures beautiful virgins and two cubs of Puydon surrounded by various objects designed to amuse and delight vision. One of the Cupids holds a mirror in front of a young woman, the other presents a bouquet to her friend. Gems are laid on the table in front of her, astrolabe and telescope at her feet, and a globe in the center of the room. The chandelier in the room is crowned with a double-headed eagle – the coat of arms of the Habsburg dynasty, a symbol of power over Flanders. Among the paintings surrounding the heroes, in the right part of the composition you can see the canvas on which Jesus is depicted, healing the blind.

Note that the central figures in the picture were performed by Peter Paul Rubens, an outstanding representative of the Flemish school of painting.