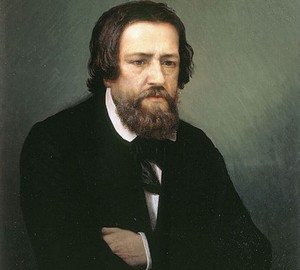 Alexander Ivanov known to the General public primarily for its great picture “the appearance of Christ to the people”. The painter was an outstanding representative of academic art. In his works gave preference to religious and mythological subjects.

Alexander A. was born on 28 Jul 1806 in St. Petersburg in the family of Andrei Ivanov and Ekaterina Ivanovna of Dimmert. The boy early showed artistic ability. At age of 11 as “an auditor” the listener begins to attend Imperial Academy of arts, where as a Professor he served his father. During the training, they received two silver and two gold medals.

In 1830 the artist went to Italy for further study of painting. The trip covered the Society for the encouragement of arts. After Germany and Austria, Ivanov settled in Rome. There he studied antique art and the work of Renaissance masters. In Italy he will live for 28 years.

In Rome Alexander Ivanov painting “Apollo, Hyacinthus and Cypress, playing music” and “the appearance of Christ to Mary Magdalene”. In the last picture the artist was awarded the title of academician of fine arts and the extension of payment on a trip to Italy for three years.

In 1836, Ivanov started to write the painting “appearance of Christ to the people.” Work on it will last for 20 years. During this time, the artist created many drawings and sketches that have acquired an independent value Besides, Alexander Ivanov wrote landscapes, portraits, genre sketches.

In Italy, the artist became acquainted with N. V. Gogol, which has long maintained friendly relations. A famous portrait of the writer, written by Ivanov in 1841.

After the deadline of payment of his visit, Ivanov lived very poor, begging for money from patrons. He had to sit literally on bread and water all his income he spent on the incarnation of his Grand design – a painting.

The artist led a secluded life, almost no one talking. He had a few bad romance novels, but he never married.

In 1845 Alexander Ivanov working on sketches for the altarpiece “the Resurrection of Christ” to the construction of the Cathedral of Christ the Savior. However, they are not destined to see the light, since the order was given to Karl Briullov.

The events of the Italian revolution of 1848 greatly influenced the artist. He had a crisis of faith, there were doubts in the divine essence of Christ.

In this difficult time, Alexander Ivanov there is another big idea. He was going to write the life and acts of Jesus Christ and scenes from the old Testament where there is mention of the Savior. The artist had planned to place in a separate building – the “Temple of humanity”. Ivanov just wanted to write 500 frescoes until the end of his life he worked on the sketches for him. After his death left 200 watercolor sketches known as “Bible sketches”. They are now kept in the Tretyakov gallery.

Religious doubts led the painter to the disappointment in the thought of his major works. Besides, he started having vision problems. In the end, the painting “the appearance of Christ to the people” remained unfinished.

In this form in 1858, Ivanov took a huge canvas in Petersburg. He was placed in the Academy of arts, together with the preliminary sketches and thumbnails. The exhibition became a significant event in the life of St. Petersburg. The picture received mixed reviews: like enthusiasm and criticism. All these experiences affected the health of the artist. Alexander Ivanov became ill with cholera and on 3 July 1858, died. Some time after his death came the news that the Emperor Alexander II bought the painting for 15,000 rubles, and granted the author the order of St. Vladimir.

Many believe Alexander Ivanov, the author of a work, but it is not. He has written other outstanding works. He made a great contribution to the development of Russian painting.