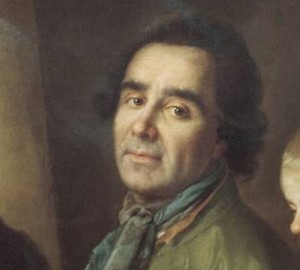 A. P. Antropov, one of the first Russian artists-portrait painters of the XVIII century. His work is characterized by precision nature, attention to detail, clarity of the composition. He also painted palaces and churches in Baroque style and classicism.

Alexey was born in St. Petersburg on 25 March 1716. His father was a guard of the Semenovsky regiment participated in the battle of Poltava. After leaving the service, he worked as a mechanic in the Armory yard and in the Office of the buildings.

In 16 years, Alex, along with three brothers enters into the Office of the buildings, replacing the Academy of fine arts to study painting. His teachers were Louis Caravaque and I. Vishnyakov, A. Matveyev, M. Zakharov. In 1739 he enrolled in the staff of the Office of the buildings.
In 1742 Antropov is involved in the design of the celebrations in Moscow on the occasion of the coronation of Empress Elizabeth, and also wrote several of her portraits.

In St. Petersburg, headed by Ivan Vishnyakov painting artist Winter, Summer, Peterhof, Tsarskoye Selo, the Anichkov palaces. In 1749 received the title of journeyman. A year later he wrote of scenery in the Opera house under the direction of Italians Valeriani and Peresinotti.

In 1752 Antropov goes to Kiev to participate in the decoration of St. Andrew Cathedral. His authorship belong to the altarpiece “last supper” and the icon “the Dormition of the Theotokos”. The trip to Ukraine has enriched the artistic style of the master. Items of folk life and traditions of Ukrainian painting brought the artist’s work the immediacy and love for bright colors.

In 1755, Alexey returned to Moscow, where participates in the painting of the Golovinsky Palace. In 1757 he was given a certificate of the painter. A year later, the artist returned to St. Petersburg and again goes to the Office of the buildings. He took lessons from the Venetian artist Pietro Rotari famous for their mastery in the portrait genre.

In 1759 under the patronage of I. I. Shuvalov, Antropov gets a place of scenic master at the newly founded Moscow University. Two years later he was appointed to the Synod as a supervisor for painters and icon painters. He established a private school of painting. Students Antropov was D. levicky and P. Drozhdin.

Antropov participated in the design of celebrations on the occasion of the coronation of Catherine II in 1762-1763 In 1789 he gave his house to the authorities for the organization of art school. He died of a fever at the age of 79 years old in 1795

First of all, Antropov known as a portraitist. He wrote ceremonial portraits of Russian emperors and empresses, clergy, nobility. Its main works: portrait of A. M. Izmailova, M. A. Rumyantseva, ataman F. I. krasnoschekova, Peter III, family Buturlins.

Being in the service in the Synod, Antropov has created a series of portraits of clerics: archbishops P. Levshina, C. Pies, G. Petrova, Confessor of Elizabeth I F. Y. Dubyanskiy. The master wrote a lot of icons.

In the images Antropova you can still see the influence of the Parsuna. This static postures, Convention image, dark background, a thorough description of the accessories, emphasizing the status of the model. The pattern is easy to recognize the social situation depicted, but his inner life is difficult to judge, because all people have the same neutral facial expression. But as they Mature him as an artist, learning foreign masters, in the works of Alexei Petrovich popping features of the European style of painting. He’s trying to portray a person’s character, his personality. This is especially evident in quite realistic for the main portrait image of the Emperor Peter III.

In his works, the documentary tries to find harmony between the traditional canons of the portrait of the XVII century and the desire to show the qualities of their models. In this lies the secret of the discreet charm of the paintings Antropov and his personality. Antropov’s works are an important stage in the development of Russian portrait art.