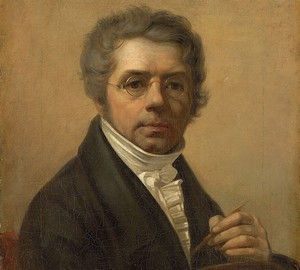 Alexey Gavrilovich Venetsianov was born in Moscow on 18 February 1780, a merchant family. His ancestors were originally from Greece, moved to Russia in the first half of the XVIII century.

The boy was studying in one of the Moscow apartments, b & b and he took an interest in painting. He copied pictures of old masters and painted their friends. At first he was helped by some old artist Pahomych, who taught him to cook paint and stretch the canvas. As young Alex bad drawing with pastels.

In 1807, the future artist moved to St. Petersburg and entered the service at the Post office. In his spare time he goes to the Hermitage, where he studies and copies of famous painters. It is known that young Venetsianov took lessons from V. L. Borovikovsky.

Early in his career, Alexey worked as a portrait painter. At the same time, Venetsianov decided to publish the magazine in the cartoons, but its release was censored.

In February 1811 Venetsianov presented to the Academy of arts self-portrait, painted in oil. For this work he was appointed to students of the Academy, and in September for the portrait of K. I. Golovachevsky given the title of academician.

During the war of 1812 Venetsianov produces a number of prints with a caricature image of francesmarie of the Russian nobility. Also, the artist continues to paint portraits of his contemporaries and heroes of the past.

In the late 1810’s the painter turns to images of peasants. At this time he married M. A. Azaryeva and buys in the name of the wife of a small estate – village Tronica and Safonkovo in the Tver province. Soon Venetsianov born two daughters, Alexandra and Felicita.

In 1819 A. G. Venetsianov in the rank of a titular Counsellor left the service and devoted himself entirely to painting. He settled in his estate and began to paint pictures of peasant life.

Venetsianov in 1824 went to St. Petersburg to show their new works to the society at the academic exhibition. His paintings were perceived favorably. The artist makes the decision to obtain the title of Professor of painting, but the Artistic Council rejects his work. His painting “the Barn”, “Cleansing beet” and “Morning of the landowner” was purchased by the Emperor Alexander I.

In 1825, the artist is forced to return to his estate, and engage in agriculture. There he had the idea to train the talented painting of peasant boys. Some of them the artist bought back from their owners. He kept them at his own expense, drove to the Hermitage. Of the pupils of Venetsianov later came a lot of famous artists.

In 1828, Emperor Nicholas I called Venetsianov in St. Petersburg for execution of one delicate tasks. It was necessary to rewrite the portrait of A. N. Golitsyn, spoiled by the English artist George Dawe. Fulfill the Commission of the king, Venetsianov achieved the liberation of the serfs painters Englishman.

In 1830 A. G. Venetsianov has applied for financial assistance to the Emperor. He needed money for the art schools and their families. The Emperor granted the petition. The artist donated a one-time payment and was invited for an audience with the king. Alexey Gavrilovic was awarded the order of St. Vladimir 4-th degree and was awarded the title “artist of the Emperor” with the payment of an annual salary.

After the death of his wife, the artist devoted himself entirely to his disciples. In his estate he built a special pavilion, where he conducted classes. For older students, he found orders for writing religious iconography. The money bought materials, and food and clothing for the inmates. The disciples went to him from all over the country. Those he could not take to his training, Venetsianov was given money to buy materials.

An elderly wizard gave more time for their educational activities. He wrote fewer works. In St. Petersburg he began to publish his articles on contemporary artists. Among them, many sought to make acquaintance with Venetsianov. Sometimes he painted portraits of his acquaintances in Petersburg.

In the winter of 1863 the artist became paralyzed, from which he with difficulty recovered. Venetsianov watched with sadness as he discovered the “peasant” genre becomes fashionable. Young painters began to draw not the truth, and pretty pictures for the sake of the viewer. By the time the artist was denied the annual pay, his goods were laid. He arranged for the auction of his works, and almost all of them were sold out. However, the amount collected was barely enough to pay off debts and for the donation of the St. Petersburg children’s hospital.

All petitions to the artist for permission to teach at the Academy of fine arts was rejected. The last years of his life Venetsianov held in his estate. He was not left, he was not interested in city life, and it already began to forget everything. He died in the winter of 1847 in the accident. The horse carried a sleigh. Venetsianov tried to stop them, but became entangled in the reins, and the horse dragged his dead body on the ground.

The death of the master remained unnoticed in St. Petersburg, but he left a deep trace in Russian art of the first singing simple peasant and giving way to the lives of many students.