“All cholera is to blame,” Pavel Andreevich Fedotov – overview of the painting 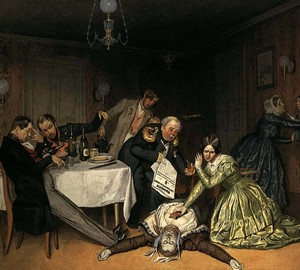 To this picture, the artist composed a poem – an impromptu placed on the back of the canvas.

On the canvas, the brush master depicted a plot everyday scene with a pretty drunk man who fell down after a noisy drinking from a chair to the floor. The artist did not like drunkards. He ridiculed them in verses and paintings. The idea of the picture was an ironic content. He wrote this work for a long time. The heroes of the plot Fedotov wrote off from his relatives, depicting even himself. The man in the uniform sitting at the table with his hand raised up is the artist himself.

An ordinary family feast with invited guests is presented in a serious-comic form. One of the guests just drank the wine. He no longer realized anything and fell to the floor, scattering his hands. Around him people fuss. A woman tries to bring him to life by pressing his brush on his chest. A young man holds a kettle and worries about the condition of the drinking guest. An elderly man fanned him with a newspaper, and later began to stretch a glass of tea to drink. But the goulak lies stupefied, closing his eyes and does not understand anything.

In 1848, an epidemic of cholera reigned in St. Petersburg, taking the lives of people. It seems that the man on the floor is dying, or he is seriously ill and his family is helping him. The artist skillfully conveyed all the important details in this work. Other men at the table continue to drink and do not pay attention to a person who has fallen to the floor. They are discussing their affairs.

There are two women near the wall. They quarrel among themselves. One holds a cat under his arm, and the other person pulls him with all his might by the leg. A woman with a pet is very drunk. In the other hand she has a bottle with which she does not want to part.

The brush master used dark gray gamut in his work. In the picture, light shades and contrasts are clearly highlighted. The interior of the room is poorly lit.