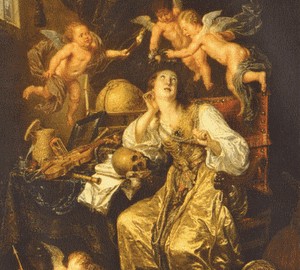 The composition and iconography of this Allegorical portrait of Van Dyke were largely used in the painting of Tenirs. It is unusual for Tenirs, because it is replete with numerous symbols characteristic of the Baroque era. For example, the image at the bottom of a work of a transparent sphere accused of a snake is a symbol of sin defeated by Christian virtue. According to de Iong (1975/76), who examined in detail the iconography of the Allegorical portrait of Van Dyck and the ermitage picture of Tenirs, “a woman rests her foot on a glass ball symbolizing the despicable world.”. The image of the vain, earthly world rejected by a woman is emphasized by the reflection of a window on a ball. A skull is depicted under the elbow of her right hand. This is a death sign and other items lying on the table and on the pedestal in the lower right corner (floor clock, mirror, jewelry box, books, musical instruments, coins, gold cups) are attributes of the Vanitas still life. De Iong believes that the artist hints here at the concept of “a faith that conquers death.”.

In the picture of Tenirs, a woman with the index finger of her right hand touches the pearl in the earring. With her left hand, she holds the pearls of a necklace hanging on her neck. Under the necklace you can see another large pearl decorating the suspension of your chest. According to de Iong, with these gestures and a pious look, “the figure shows heaven the pearls of his faith.”. This is a “gospelsky pearl” – a motive that is mentioned in the Gospel of Matthew (13: 45-46) and interpreted by Francis de Salem in the book “Pious Life” (1608; translated from French into Dutch and published in Antwerp in 1616). On the left below are two frivolous paths, a kind of Eros and Anteros (or Erot and Anterot). The first of them, Eros, is shown as an amur with an arrow in his hand and a blindfold (he embodies the image of Blind love). The second – the Amur twin, with the wings of a butterfly – holds a fading torch, which, apparently, means ignorance or disbelief. Eros and Anteros, symbolizing earthly love, are as if defeated by a woman representing the Christian faith.

At the top of the composition, three angels are visible, personifying Heavenly love. Two of them crown a virtuous woman with a wreath of flowers. The third angel holds a burning torch, meaning, according to Cesare Ripa, “enlightenment of the mind through faith.”. According to Ripa, the “holy faith” is perceived through the rumor, as evidenced in the Tenirs painting “the Gospel pearl” in the ear of a woman listening to the voice of heaven. Undoubtedly, Tenirs addressed the book of Cesare Ripa “Iconology” (1593), published in Dutch by Dirk Pers in 1644.

Warsaw (orally, 1958) dated the ermitage picture 1640-1650. In our opinion, the work was completed in the early 1650s. In 1635 and 1651, Tenirs visited London, where he may have seen one of the options for the famous portrait of Lady Digby’s brush Ban Dyck or his reproduction in engraving. After the second visit to London, the artist did not create a copy from the picture, but his own variation on the theme of Van Dyck, and not in the genre of portrait, but in the form of an abstract allegorical image.

The “Iconology” of Cesare Ripa was a source for many European artists of that time. As a iconographic parallel to the painting by Tenirs, one can consider the work of the Dutch artist Vermeer Delft “Allegoria of Faith” (1671-1674, Metropolitan Museum, New York). Tenirs and Vermeer each interpreted in their own way individual attributes of Vera’s allegory. Vermeer, more than Tenirs, followed Ripa’s instructions. Tenirs was much more free to use an emblematic pattern, so the ermitage picture does not have to be renamed the “Alegory of Faith”, as de Iong did in his article, but giving it the name as a subtitle seems quite legitimate.