“Allegory of Stupidity”, Quentin Masseis – a description of the picture 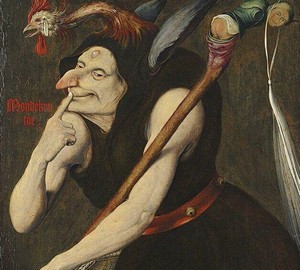 An interesting grotesque work was created by the artist! It was written around 1510. The artist worked hard and painstakingly on her, highlighting the desired element in each part of the picture.

In the center of the artistic composition, the master of the brush depicted a jester. These characters were popular on holidays, festivities and carnivals. The jesters were funny “fools” who entertained the audience with theater behavior, tricks and jokes. People laughed at them and made a laughing stock.

An ugly jester copies the gesture of the Greek God of silence of Garporat. He put his finger to his lips, stretching out in a bent pose. Silence was previously considered a high virtue. It was possessed by philosophers and sages. Masseis deftly and inventively turned the jester’s gesture into a parody. Grotesque topics were his favorite work in creativity. He presented a picture in the form of an allegory of stupidity.

The face of the jester is unpleasant and repulsive. He has a flattened forehead, narrow eyes, a long red nose, stretched lips and a disgusting look. On the fool, he wears a black cloak with a hood with the head of a plucked rooster and donkey ears. Under the head of the bird is an inscription with red letters in a foreign language: “Keep your mouth shut.”.

The artist used boring gray tones in his work, giving the picture despondency. An expressive figure of a jester, bearing sympathy for the hero. In past centuries, there was another category of such people: smart comedians in the clothes of “fools”, who served as objects of human ridicule.

Around the same time, with the work of Masseis, the picture “The Praise of Stupidity” appeared, created by the scientist, philosopher, theologian, satirist and humanist of the Northern Renaissance Erasmus of Rotterdam, presented as “stupid wisdom”. The artistic masterpiece of Quentin Masseis is very unusual!