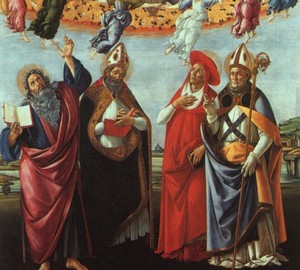 Guild of Florentine Jewelers around 1480. ordered Botticelli to paint the altar for her church of San Marco, dedicated to the patron saint of the guild of St. Eligia. This saint in the vestments of the bishop, with a staff in his hands, stands on the right in a group of four saints; he looks directly at the audience, and his right hand is raised in the gesture of blessing. On the contrary of St. John the Theologian, with an energetic gesture, points to the scene taking place above his head, holding in his other hand a small notebook with clean pages, in which he is ready to write down his prophecy about a woman crowned with stars, predicting the coronation of the Virgin Mary.

Behind them are two Fathers of the Church: St. Augustine, also in the episcopal vestments, writing his book, and St. Jerome in the ranks of the cardinal, gazing intently up with an expression of amazement. Surrounded by cherubim and seraphim, as well as dancing angels who shower her with roses, Virgin Mary is crowned by God the Father, crowned with a three-tier papal miter. The Golden Rays of Heaven – An indication of the workshop of the gold affairs of masters, Botticelli customers.

SV. ELIGI. Eligius (approx. 588-660 years. n. e.), the patron saint of blacksmiths and jewelers, studied at the mint in Limoges and became a skilled engraver. He founded a man’s monastery in Solinyak and a female monastery in Paris. In 641. became Bishop of Neuon and Tourne. His attributes are an anvil or ticks with which he allegedly grabbed the devil by the nose when the evil one appeared to him in a workshop under the guise of a young woman. A sculptural group of four Christian martyrs Nanny di Banco around 1411. in the blacksmith niche of the outer decor of the Orsanmicel church in Florence, she portrays Eligius as a bishop. The relief under this sculpture retells the legend of how he sawed off his horse’s legs so that it would be more convenient to forge. After finishing work, he miraculously returned his legs to the body of the horse.