An interrupted date, Brullov – overview of the painting 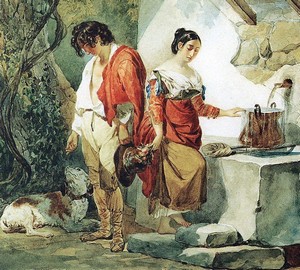 In the 1820s, while traveling in Italy, Brullov is fond of genre painting, and often chooses the technique of watercolors for himself. At the beginning of the decade, the first watercolor “Trumped date” appears (there will be two of them with that name).

The work immediately attracts attention – the artist goes beyond the scope of entertaining scenes designed to decorate the album sheets. In addition to the special presentation and new interpretation of the genre, the style of the master is also surprising – the lyrical scene, displaying a short meeting of two lovers, permeates the bright light, and is also characterized by the accuracy of the picture and the realistic position. Brullov was the first to draw public attention to watercolors as a way to translate chamber scenes, while possessing a intelligible, understandable language.

The second watercolor with the name “First date” appeared in the late 1820s. It should be noted that this work is more famous. The second name of the picture is “Water is already running over the edge.”.

From the first minutes of looking at the picture, you begin to wonder how many “talking” details have been displayed here. This is not an easy genre sketch in watercolors, but a whole story. Two young lovers of Italians met at the well, but their tender date was interrupted by the girl’s mother, suddenly appearing at the window. The guy is embarrassed and upset, and the girl is so low that she does not notice that the water has long reached the edges of the bucket and is pouring over the edge.