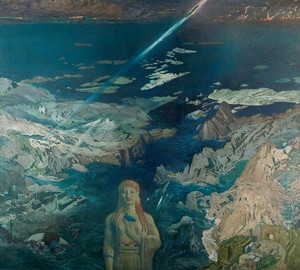 Ancient horror – Lev Samoilovich Bakst. Oil on canvas. 250 x 270 cm
The picture depicts the death of a civilization related to Ancient Greece. It is likely that the painter wanted to show the death of Atlantis, but there are no facts confirming this hunch.

The name of the picture has a deep symbolic meaning. “Ancient horror” means the horror of man powerlessness in the face of the omnipotent Destiny. The Gentiles believed that what was destined for a person would undoubtedly come true, and he had no chance of changing this.

Such fatalism is characteristic of the pagan concept of the universe. With the advent of Christianity, the situation has changed somewhat. The Christian does not believe that life is completely predetermined: it is in the hands of God, but God himself provides an opportunity for choice.

However, due to the fact that Christianity, and with it the old culture, is leaving the stage, pre-Christian, uncivilized and uncouth stereotypes again appear in their pristine nudity.

The death of civilization reflected in the picture is by chance associated precisely with the end of the history of the mythical Atlantis – just like that imaginary mainland, this one flooded with ocean waters.

The viewer realizes that the water, which has already flooded beautiful architectural structures, temples made with the impeccable art of the house of rich citizens, rises higher and higher. There will come a time when the mountains will be flooded, and, despite their apparent inviolability, they will still perish into the abyss of water.

However, an ancient bark rises above this scourge, smiling with an archaic smile. Although traditionally it is called Aphrodite, it is not known for certain which particular goddess of the bark (female statues distributed during the archaic period) were dedicated.

Wisdom, which is visible in the guise of the goddess, is not subject to change, therefore, according to the author’s plan, everything can die and die, and it will remain until the very end.