“And we work,” Nikolai Konstantinovich Rerich – overview of the painting 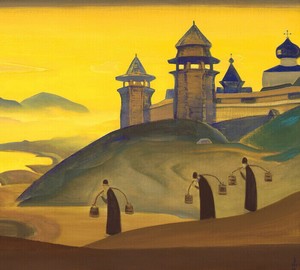 This creation is part of the artistic cycle of Nikolai Konstantinovich Rerich “Sankt”, describing the life of Russian saints. The painting was created in 1922 when the master lived in New York. He was inspired by the idea of bringing Russian culture, art and philosophical thought to the Americans. The idea was crowned with success – the exhibitions of Rerich were very popular.

The picture “And we work” depicts three elders. We do not see their faces, the figures are depicted extremely schematically, but the viewer feels their humility, piety, peacefulness and concentration. Heavy shortnesses lie on their shoulders, from which their silhouettes are bent. But it is obvious that the righteous do not shy away from hard work, but perform it with humility. The author seems to say that harmony in human life can only be achieved through painstaking work. This refers us to the teachings of His Beatitude Sergius of Radonezh, whom Nikolai Konstantinovich revered and repeatedly portrayed in his works.

Particular attention should be paid to the landscape of the picture. In the background you can see the hills on which the monastery complex rises, surrounded by wooden observation towers. Below is a river to which three monks are heading. It is interesting that the river gradually merges into a single space with the earth and sky, which creates the illusion of the infinity of the heavenly spheres, emphasizing the holiness of this place.

The elements of the canvas do not contain sharp angles, nor are there sharp color transitions. The composition is designed in golden, brown and black tones with a soft gradient. Rerich achieved this effect of the play of light thanks to his favorite tempere technique.