“Ankor, another anchor!”, Pavel Andreevich Fedotov – overview of the painting 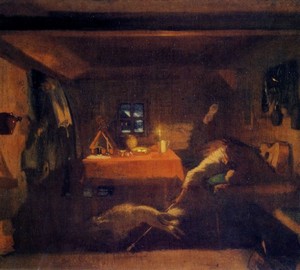 The painting “Ankor, another anchor!”was created in the year of the tragic death of the artist. This small canvas of Pavel Andreevich Fedotov evokes a sense of skinny longing.

In a weak light of the burning candle, a dull, gloomy room with a low ceiling barely spills. Hot yellow-red reflections, running, highlight either a pile of clothes on the wall, then the remnants of dinner, then the outstretched hand of a lying half-taked officer, then his leg pulled up in a light sock.

An officer standing on a post somewhere in the wilderness is amused. Putting aside the bored guitar, he began to drive through the poodle stick, repeating the words of the team in Russian and French: “Ankor, another anchor!”. How much time he spent in this occupation? Probably a lot. There is nothing more to do, no feelings, no desire. Infinitely repeats the same words, the completely stupefied dog jumps… A painful dulling idleness, deep loneliness as if a person imprisoned in this stuffy hut create a feeling of complete hopelessness, hopeless longing.

The cold moonlight behind the window shades the slightly trembling flame of a candle, the lights of which beat against the walls of a small low room, just a living human soul in a futile search for an exit.

Painting is unlike the miniature technique of the artist’s earlier works, where he appears as a brilliant master of the entertaining story. The broad free brush of the painter is designed here not so much to describe how much to express feelings. “Ankor, another anchor!»- this is the tragic confession of the Russian artist in the middle of the last century. Before such a power of drama and reproof, Russian painting did not rise.