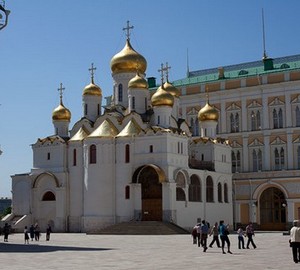 The Museum “Cathedral of the Annunciation” is one of the most visited museums of the Moscow Kremlin. His collection owned the works of art. This temple is related to the activities of Andrei Rublev in the Kremlin.

The Annunciation Cathedral has its historical differences. He was part of the Palace of the Grand Duke: directly behind it were the sovereign of the Duma chamber, with which it was connected by transitions. It was carried through the triumphal procession sometimes took place in the Palace of foreign embassies. About him in the old days it was said that he is “the great Prince in the courtyard at the hall”. It was the first in importance is the home Church of the Muscovite rulers. All of this causes attraction to create and decorate the best artistic forces of his time.

This monument is, perhaps, no less than the assumption Cathedral, you can tell us about its ancient links with the history of Moscow, the Kremlin architectural ensemble. The original part of the Church of the Annunciation of the end of XIV — early XV century, the whole of her bottom, the so-called “basement” floor. It serves as a ground layer, a ground for the existing building. This is one of the earliest among the surviving monuments of white-stone architecture of Moscow. It is possible to judge about the peculiarities of the architecture and character of a large building in the Kremlin, which was started by Ivan Kalita and Dmitry Donskoy continued and his son Vasily. You can add that scientists are successful archaeological research under the base of this ancient building and find traces of even earlier buildings.

Preserved Chronicles of the early XV century, which made it clear that this meant the temple to the Grand Prince of Moscow: he instructs him to decorate with paintings the largest and most famous painters Theophanes the Greek, Prokhor from Gorodets and Andrei Rublev. The Cathedral, located near the Golden-domed Palace near another Moscow miracle at that time — a city tower clock with bell, was the site of important ceremonies, which were to raise the authority of Moscow in the period of active elevation and creation of a single state. Corresponding place Annunciation Cathedral took during the reconstruction of the Kremlin under Ivan III. He had even more than before, to give a solemn character of a princely residence. Its construction had been side by side with the development of receiving the throne room — a Large, or faceted Palace and treasuries.

The creators of it were the same talented, “navixia in kaminoseki tricks” architects from Pskov, which at the same time erected on the Cathedral square Of the Church, completed in the several years before the Annunciation.
Home the Grand Church was built from 1484 to 1489. Size it is much superior to the Palace temple of Metropolitan. Placed on the ancient basement, it is his triceps end rushed up. Its basic design and artistic quality are typical for the Moscow architectural school. The image of the monument that creates a joyful, festive, light mood that was so typical of art of the capital this time, reflecting the General rise of national consciousness. 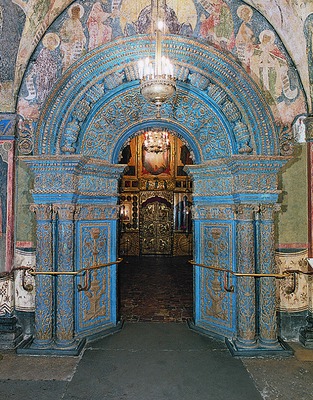 Later, in the XVI century, this monument was influenced by historical change. It is mostly other buildings in Cathedral square were decorated, renew, giving it more splendor, elegance, grandeur. To 1508 basically ended an unprecedented Grand building in the Kremlin regarding the establishment of a new capital fortress and residence of the Grand Duke. Then, in connection with the completion of a new large Palace complex adjoining the Cathedral of the Annunciation was painted by the famous Moscow painter Theodosius, became Michael’s, and inside was a lavishly decorated “with gold and beads”. Its portals facing the Palace and the square is altered to the Italian way created like a small triumphal arch with richly carved headpiece and gold.

In the reign of Ivan the terrible, when there was a further political changes in the development of the centralized Russian state, Cathedral of the Annunciation has become more representative with an impressive view: the original three-headed Church turned then to the majestic nine-headed temple. So he came to our time.

Connection of the monument with historical events, with the life of the capital was varied. One of the features of the Annunciation Cathedral is that it was the “templefrom the Royal Treasury“. In the basement of the Cathedral under its massive white stone arches were kept part of it. The main store was next in the exchequer, which adjoined the apse of the Cathedral and was constructed with him at the same time. In fact, the house and the basement of the Cathedral was a single copy the greatest state values and all sorts of treasures: “spinels and rubies, gems and pearls, all sajania, belts, and chains of gold, vessels of gold, silver and stone, silk garments and all other garments that have no”. There was a strong wall, deaf wrought iron doors, secure locks. No wonder the cellars of the Treasury court turned sometimes into prison for dangerous political opponents of the Grand Duke. Escape from here was impossible. Here, for example, in 1492 and died in prison before the pardon, the rebellious Prince Andrew Garai, brother of Ivan III. It is clear that it was quite a safe place to store characters public authorities, archives and treasures. It is from here to the official ceremonies, issued a Grand-Ducal regalia, and then swept through the Cathedral of the Annunciation.

In the middle of the XVI century after a major disaster — the fire of Moscow in 1547, in the fire which injured the Annunciation Cathedral and the Treasury chamber, the Royal chapel, the temple was transformed into a kind of centre for arrangement of the lost monuments of the Kremlin: here sought recovery artwork, this prompted General supervision over their execution.

In the history of the Annunciation Cathedral commemorative 60-ies of the XVI century, when Moscow in the quest to reunite all the ancient Russian lands into a single state captured during the Livonian war, the city of Polotsk. This event was dedicated to the construction in the home Church of Ivan the terrible special aisles and the execution of murals at the entrance to the Cathedral, glorifying the feat of warriors.

It is noteworthy that in the Annunciation Cathedral, as in other monuments of the Cathedral square, it sounds Patriotic, military theme. Not the whole story of this interesting monument appears to be clear. Researchers takes a lot of the problems associated with it. Some of them are debatable. Bring the way of truth in this debate is the constant and careful study of the monument and its Museum collections, archaeological excavations, restoration open. 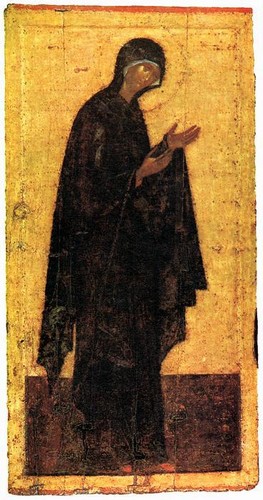 The biggest event in the history of Soviet restoration of the case was the disclosure of the works of Theophanes the Greek, prochor from Gorodets and Andrei Rublev in the Annunciation Cathedral of the Moscow Kremlin. It was believed that the icons painted by them for this monument at the beginning of the XV century, is not preserved, as the chronicle reported about their death during a fire in 1547. However, in the first year after the transition of the Kremlin cathedrals in the Museum of Soviet conduct, they were identified, and in 1919, fully exempt from later records. So, in the first years of his new work the Annunciation Cathedral was a Museum of masterpieces. However, to complete the organization of the Museum it was still a lot of time. A large amount of restoration work was clearing the wall painting, which was carried out in several stages. The disclosure of the icons of the Cathedral continues to this day.

Cathedral of the Annunciation — one of the richest museums of ancient art. Here are not only creations of Theophanes the Greek and Andrei Rublev, but the earlier works, many works of the XVI century. It preserved wall paintings, executed in 1508, the sons and disciples of the famous Dionysius — master Theodosius “with the brethren”.Painting master Theodosius, organically entering the interior, merging with it, forming a single whole with the architecture. Here and the murals, icons and decoration — connect in harmonic consonance. For the Cathedral in General characterized by the predominance of warm, soft, colorful combinations.

The picturesque ensemble of the Annunciation Cathedral is not only remarkable in itself, but it still is a living example of how in the sixteenth century sought to preserve traditions in art, paid tribute to heritage, the authority of the past. This is evidenced, above all, respect for the iconostasis with the works of Andrei Rublev, the most revered artist in Ancient Russia. In addition, the researchers draw attention to the fact that an individual plot the cycles in the murals of the XVI century is clearly repeated (in General, unfortunately, almost unknown) to the plot structure of the murals that adorned the Church of the Annunciation in the early fifteenth century.
A rare collection of icons of the Museum “Cathedral of the Annunciation” gives a chance to its visitors to consider the works of Moscow painters over several centuries. A large group of works of easel painting placed in the South gallery of the monument in addition to the icons presented in the iconostasis. Their main part belongs to the Cathedral of the Annunciation, the other entered the exposition of the other icon collections of the Moscow Kremlin.

The exhibition introduces not only with the art of Moscow, mainly XV—XVI centuries and its origins. It opens with monuments belonging to the Vladimir-Suzdal art and culture— icons of the XIII century “Savior Golden hair” and “the appearance of Archangel Michael to Joshua”. After them are placed works relating to important periods in the history of ancient Moscow painting — the age of Andrei Rublev and Dionysius of time. The most numerous group of works belongs the second half of the XVI century. Almost all of them originate from the upper aisles of the Annunciation Cathedral. A remarkable monument of architecture, priceless works of art, a kind of artistic chronicle of ancient Moscow — this is our Annunciation Cathedral.