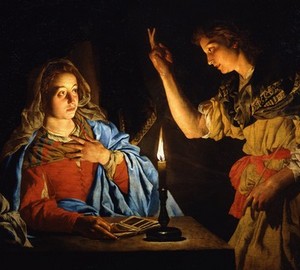 Annunciation – Matthias Stomer. 1633-1637 / 1638. Oil on canvas. 113×166
Matthias Stomer (about 1600 – after 1649) was one of those who are called “caravajists”, that is, a follower of the Italian artist Michelangelo Merizi da Caravaggio, whose painting the Dutchman could see during his stay in Naples. From him, Stomer adopted, among other things, the features of the luminosity that he used in this picture.

Virgin Mary and the archangel Gabriel who appeared to her are illuminated with a flame of candles standing on the table, grabbing their figures from the room dusk. The fluctuating light increases the tension of the entire scene, read in the expression on the face of Maria and Her gesture. Everything Stomer portrayed in this light looks magical. But the artist, resorting to such a method of lighting, not only creates a mood, but also solves purely picturesque tasks. The hands and faces of the characters gain warmth, and it seems that blood pulsation is visible through transparent skin. The viewer feels himself standing very close to this table, that is, a witness to what is happening. Caravaggio himself and everyone who was under his influence achieved this effect in painting.