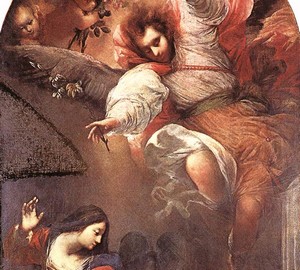 Annunciation – Sebastiano Mazzoni. The middle of the XVII century. Oil on canvas. 154×112
The “Blessed” by Sebastiano Mazzoni (1611-1678) is striking in the unusual interpretation and composition of the evangelical plot. Most of it is occupied by the figure of the archangel Gabriel, with the knowledge of the Virgin Mary about the imminent miracle, the immaculate conception and the birth of Her divine Infant. And although in the gentle hand of the archangel a lily flower, a symbol of purity, you can still understand young Maria, who has so abruptly recoiled. The artist gives it almost perfect beauty, puts red-blue clothes on traditional iconography Madonna, but the impulsive movement of the Virgin seems to be the result of a reaction not so much to the news as to the unexpected and rapid descent of the archangel. This turbulent dynamics is emphasized as if by slowing down the bent knees of Gabriel, with their scorching hands, but above all with the deadly swirling of his clothes.

Mazzoni was born and worked in Florence, then moved to Venice, where he lived until his death, doing more and as an architect. Picturesque altar compositions reveal his special skill in transmitting deformation from the angle and mystical flashes of light, however, softened by color overflows.