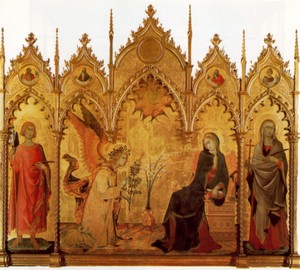 The artist wrote “Blessed” for the altar of St. Ansania in the Cathedral of Siena. The figure of Maria looms on a golden background symbolizing the sky, restrained, smooth silhouette. The shape-like figure of the archangel Gabriel – his still flying wings, a cloak fluttering from behind – brings a sense of air and wind to the room. From the heavenly messenger to Mary, the words from the Gospel come in the picture: “Rejoice, the Blessed Lord is with You” (Luke 1:28), and this subtle connection looks part of that ornament that forms lines and colors. Here everything caresses the eye: bright angel wings, and white lilies standing in the vase – a symbol of the purity and integrity of Mary, and the line, and a combination of colors in the picture.

The images in the central stage are fragile, barren, like fanatic by the mountain air. Compared to them, St. Ansania and St. Yulitta, depicted in the side of the altar, were written out more volumetricly, which made the researchers think that this was not the creation of the Lippo Memmi brush, whose signature is also under the picture. However, the artist’s student most likely only gilded the frame, and Martini painted the saints himself and depicted them more vital in order to emphasize the unearthly spirit of the presented scene.