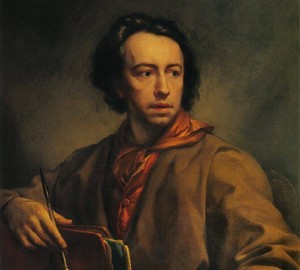 The life of Mengs, though he lived only 51 years, can be called established, successful, very mobile, held in the country visits, caressed by the Spanish and German kings, Queens and cardinals. And he was born in the family of the artist, Saxon court painter Ishmael Mengs. Future boy has already been predetermined – it is, of course, will be the artist.

Born Anton Raphael in Bohemia. His father is the first teacher, which gave him the basics of painting. In 13 years, they leave with the father in Rome and three years, studying the classics of Renaissance and ancient art. Great masterpieces Raphael had on the young man a huge impact, which subsequently affect the work of Mengs.

His career is very rapid. 1745, just 17 years old, he was appointed Cabinet painter in Dresden when the elector of Saxony August III.

Mengs travels frequently to Italy, where he met with the Roman beauty model Margherita Guazzo and in 1748 marries her. By the way, the marriage was very successful and prolific, Anton and Margherita will be seven children. A year later, upon returning to Dresden, 21-year-old painter appointed court painter, and from 1751, the main painter at the court.

He is more inclined to the religious paintings and mostly his work fresco for the altar arrangements. Known for his “Ascension”, made for the Dresden court Church, “Triumph of St. Eusebio” for the Roman Church, the painted ceiling in the Villa of cardinal Alessandro Albani.

His style – classic, neo-classicism, the rejection of the excessive splendor of the Rococo. In his works, the artist prefers light effects and pathos, and simplicity, morality and education. Such views of the artist are influenced by German art historian Johann Winckelmann, who becomes the friend of Mengs for many years.

Painter enjoys the patronage of the Spanish patron josé de Azar, receives the papal knighthood of the Golden spur from Pope Clement XIII. Executing orders of, Mengs he travelled around the cities of Naples, Caserta, Bologna, Rome, Dresden. In addition to the work on the frescoes and paintings of religious subjects, Mengs became known as a portraitist. Him posing with famous and influential people of that time – king of Prussia, Frederick the Great and king Charles III of Spain, the singer Domenic Anniballi and many others.

In 1761, at the invitation of the Spanish court, Mengs goes to Madrid together with the talented Italian artist Giovanni Battista Tiepolo for the design of an Oriental Palace, the official residence of the Spanish kings. But still continues to travel to Italy to paint portraits of royalty and paintings. In Rome in 1774, he became President of the Academy of St. Luke.

In the Spanish period is known for such works as “Christ in Gethsemane”, “the Apotheosis of Hercules”, “Aurora”, “Parnassus”, portraits of Carlos IV, Mariia Amalia of Saxony, self-portraits, sketches.

His paintings are aesthetically beautiful, the author combines tradition of constructing songs and the beauty of the silhouettes. Figures, especially in religious subjects, noble, lofty and humane, as that of Raphael, of which Mengs revered all my life. Portraits of the painter is very realistic and individual.

In 1777 he went from Madrid and settles in Rome. In 1779, the talented artist died. The work of Anton Raphael Mengs liked the Russian Empress Catherine II and she gladly bought them. Because of this, we now admire the magnificent paintings of the painter in the Hermitage.