“Apofeoz of war”, Vereshchagin Vasily Vasilievich – overview of the painting 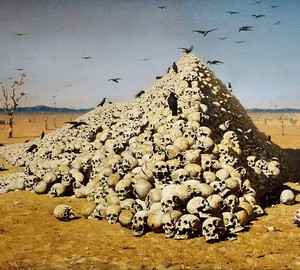 This canvas can be considered the most striking and expressive face of the horrors of war. Although it was created under the impression of the primitive cruelty of the eastern conquerors, it does not have a narrow focus – it is addressed to everyone who started and started wars. No wonder the author himself left a canvas on the frame that the picture is dedicated to the conquerors of the past, present and future.

According to legends, behind the troops of Timur remained piles of corpses and skulls folded into the pyramid. Even in those days when the artist lived, the barbaric tradition was preserved – the eastern rulers regarded the severed parts of the body of enemies as military trophies. The artist took this habit as a symbol. The result was a unique picture in its expressive strength, which has not lost its relevance in our time.

By the strength of the influence on the consciousness of the beholder, enclosed in this canvas, it can be compared with the best works of Dali, so it is saturated with the very spirit of symbolism. But, unlike Dali, her symbolism is not harmless and devoid of abstraction. Everything that is depicted on the canvas is symbols of one specific, ruthless and inevitable disaster – war.

Having deprived the picture of characteristic temporary, historical clues, the artist made it a reflection of the result of any military operations, regardless of when and where they could have occurred. The war produced such an effect a thousand years ago, today, it may remain so in the future. The canvas just screams about it: “People, look what you are doing!?”.

The huge expressive power of the canvas is achieved by minimal artistic means. Before us is an extensive panorama, which is a deserted, scorched area with individual surviving sludge of burnt, charred trees. There is no life in it, there is not a drop of green color – only dead yellow sand and black dry trees. The only sign of life here is a flock of black ravens, symbols of death. They are on a canvas everywhere – they fly in the sky, sit on trees, celebrate the thrift in the fallen.

In the distance you can see the ruined city, also depicted in yellow “dry” colors. It is empty and abandoned, there are no inhabitants left in it, there is nothing alive at all. This whole picture of mass devastation is illuminated by a bright ruthless sun under a cold, lifeless and indifferent sky.

In the foreground of the canvas is a huge mountain of human skulls, folded into the pyramid. Crowns are sitting on it, and many traces of saber and bullets indicate that we are facing defenders and civilians of the city. That is what war brought with it – death, destruction and complete devastation. The land, which was once bright and blooming, full of life and joy, turned into a terrible place where only scavengers remained.

The picture does not indicate either a specific place of action, or a time period, or the one who committed all these atrocities. Although the picture was originally conceived as historical, reflecting the results of the campaigns of Tamerlan, who was famous for his cruelty and special addiction to chop off his heads, the plan outgrew itself. The canvas has become a brilliant accuser of all wars. Wherever they are led, no matter what people fight for, the result of wars is always the same – mass meaningless sacrifices destroyed to the foundation of the city, fertile lands turned into barren deserts, inhabited only by ravens and creeping reptiles.

The artist, who had been participating in hostilities all his life and gave his life for the king and the Fatherland, as no one else knew the essence of the war well, saw its results with his own eyes. He managed to create a unique picture in expressiveness and symbolism – a vivid accusation of the ruthlessness of the war.