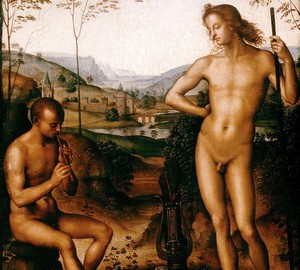 Apollo and Marcy – Pietro Perugino. 1495. Wood, tempera. 39×29
The painting by Pietro Perugino (1448-1523), a Renaissance painter, a representative of the Umbrian school, is dedicated to the Greek myth of the musical competition of Satir Marcia and the art god Apollo. Satyr learned to skillfully play the flute thrown by the goddess Athena, and, proud of his perfect performance, made a challenge to Apollo. Apollo, the highest musician, could not forgive the impudent trick of the satire, who dared to argue with him. Playing on the lyre, he won a musical duel, and in punishment for insolence tore off his skin with Marcia.

The cruel ending of this story did not enter the plot of the picture. Perugino wrote a contest of two musicians, or rather a game on the flute of Marcia. He is immersed in music and does not notice his Olympic opponent. Beautiful Apollo coldly looks at the seated figure of the satire; his lyre, standing at his feet, awaits the moment when the radiant god will extract captivating sounds from her, with which the mortal music cannot compete.