“Apostles at the tomb of Christ,” Francisco Ribalt – overview of the painting 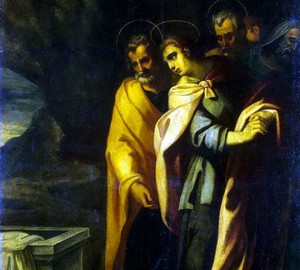 This picture is one of many biblical works. It reflects the moment when the followers of Christ, his apostles, came to the tomb and found it empty. The artist managed to vividly reflect the very moment of discovering the absence of a dead body and the final realization that the one whom they considered their teacher was a real man of God.

On the faces of the apostles mixed different feelings. Here, the shock in the mixture with the surprise of the young apostle John, who broke his hands, deep sadness and concern – among gray-haired elders. The composition of the picture is multi-figure, but in the foreground the viewer is fully accessible to two figures in full growth – the youngest of the apostles John and obviously Peter, the faithful follower of Christ. Compositely, the figures are shifted to the side so that the viewer can see the reason for visiting the burial cave – a stone coffin with cast mortal veils. The background of the canvas is the gloomy and coarse stone walls of the cave, almost invisible in the dark.

The color scheme of the picture is rich, but restrained. The brightest here are the cloaks of the apostles of juicy and deep golden tones. The canvas uses the principle of contrasting lightness, introduced into the painting of Caravaggio. Most of the picture is drowning in darkness, and the protruding illuminated details give the figures volume, relief and dynamism.

The gloomy darkness of the cave and the sadness of the event itself seem to recede under the rays of the divine golden light pouring from the empty stone sarcophagus. This can be seen from the illuminated fragments of the clothes of the holy elders and through the shadows on the floor cast by a coffin. Although the light falls from the side of the entrance to the cave, it is clear that these are not just the rays of the sun or moon. This is the divine light of revelation, which will help not to get lost in the darkness of ignorance and superstition.