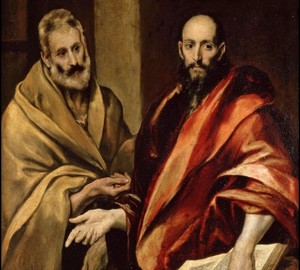 A native of Crete, El Greco (1541-1614) belongs to the Spanish school of painting. The recognizable style of the artist-manierist is distinguished by dazzling flashes of light, emphasizing the texture of the fabric and its folds, elongated proportions of the figures, exaggerated expression of postures and movements, dramatic sharpness of images, nervous linearity of the picture, coloristic dissonances.

The image of the apostles Peter and Paul in the interpretation of El Greco is a contrast between the two natures and temperaments. Paul is smart, categorical and merciless, decisive and emotional. One hand lies on the book of Holy Scripture, indicating the gesture of another as if confirms the sermons of the Christian faith written by him. The contrast is made by the apostle Peter. He is all in doubt and reflection. A meek, indecisive look speaks of fluctuations and internal discord. It is interesting to compare the hands of both apostles – Paul’s firm strong hand and the soft, suppressive – Peter. A similar interpretation of evangelical images was the find of El Greco, it significantly deviated from the norms of the existing church tradition in Spain.

The painting of the Apostles Peter and Paul is in the St. Petersburg Hermitage.