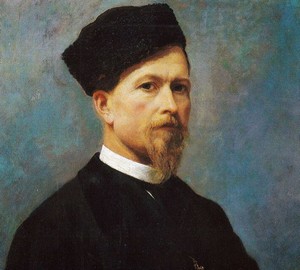 Famous painter Peter Nicolai Arbo was born in 1831, near the Norwegian town of Drammen, in the family of the Director of national school of Christian Frederik Arbo.

The boy showed interest in drawing, but only 20 years old in 1851 he began to study at the art school in Copenhagen, where for two years he received his primary art education.

In 1853 Peter Nicholas arrives at the famous Dusseldorf Academy of arts. In the 19th century it was one of the most famous and influential in Europe schools of painting. Its founders and Directors included such famous painters as Peter von Cornelius, Friedrich Wilhelm Schadow, Andreas Achenbach, Christian and Paul Raudi, as well as other artists, both European and American, and even Australian.

Under the influence of each of the leaders of the school and changed the direction of painting:

The artist is interested in history, mythology, illustrations, make friends with creative people and publishers.

In 1859 published the book “the Album of Actually”, which included lithographs from the drawings of Peter Nicholas. The main topic to create them are Swedish and Norwegian military exercises.

In 1860, in the historical illustrations book published, devoted to medieval Norway.

In the future, 20 years later, in 1879, illustrations of Arbo on Per Gunta, the hero of Ibsen, will be included in the well-known edition of Norwegian fairy tales.

Also, some illustrations Arbo included in the “Illustrations of Nordic artists in Norwegian history”.

In 1861-1863, the artist lives in his native Norway, has traveled the country and enjoy her studies and draws. One of his first paintings is “the Herd of horses on the hill”. Arbo loves to return to his work, he has several versions of the “Herd…”, “Valkyrie” and its most iconic – the “Wild hunt”.

In 1863 Arbo went to Paris, where he lives and works until 1871. He was always interested in myths, fairy tales and he continues this theme in his works, “Valkyrie” (1865), “Night”, “dawn”, “Ingeborg” (1868), “the Death of Hereward”, “the Battle of Stamford bridge”, “Transition king Sverrir through the mountains in Voss” and others.

He returned to Norway in 1872, he wrote the most important painting of his life “the wild hunt”. Currently it is stored in Oslo, at the National gallery.

Norse mythology is the “Golden thread” in the works Arbo: “After the battle”, “Day Skinfaxi”, “lidén Gunnar and Triton” and other.

Peter Nicholas is not only a talented artist, but a successful and active citizen of their country.

In 1882 he married and writes beautiful portrait of the wife – “Eliza Arbo in Spanish hat.”

In that year, the Valkyrie, in 1866, Arbo was granted the awards of the two countries: the order of the patron Saint of Norway St. Olav and the order of Vasa for his outstanding achievements in the arts for the benefit of the Swedish king.

He also actively participates in art exhibitions, is a representative of the art Department exhibition in Austria, a member of the jury, member of the Board of the Norwegian National gallery, Stockholm holds the position of a juror.

Ten years, from 1882 to the end of life (14 October 1892), Arbo is the undisputed head of the “Christiania”, an art society, named in honor of the capital of the Vikings – the modern city of Oslo.