Archduke Leopold Wilhelm in his gallery in Brussels, David Tenirs the Younger 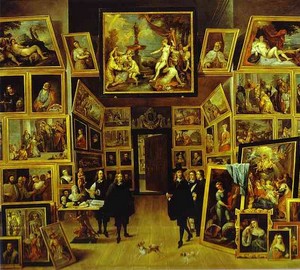 Archduke Leopold Wilhelm in his gallery in Brussels – David Tenirs the Younger. 1647-1651. Oil on canvas. 104.8×130.4
On this canvas, Tenirs (1610-1690) depicted the art gallery of Archduke Leopold Wilhelm, a famous connoisseur of art comparable only to King Philip IV of Spain. Erzgerzog, being a viceroy in the Netherlands, collected a magnificent collection of works by Flemish and Italian masters.

The artist, having entered his service, in 1651 was appointed the keeper of the meeting. He decided to perpetuate the treasures of the gallery. So, thanks to him, the “gravated catalog” of the meeting was created, called the “Bap of Painting”. Tenirs also wrote paintings with images of the interior of the art gallery itself. In the presented work, next to the exhibits of the famous collection, the viewer sees the owner himself. The canvas today is not only of artistic, but also of historical value, because copies of the works of the famous forerunners of the painter are amazingly accurate.