“Arise in Empires,” Jerome Bosch – a description of the picture 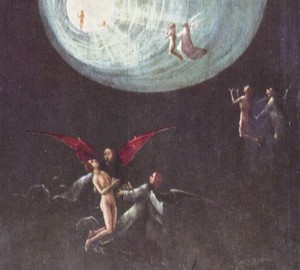 Climbing Empires – Jerome Bosch. Picture from the series “Blessed and Damned.”. 1504-1505. Board, oil. 87 x 40 cm
For a modern person, this picture is the closest and most understandable. We all know well the stories of people who visited the clinical death in the next world about the light tunnel, at the end of which long-lost beloved people were waiting for them. This picture, which has more than half a millennium, depicts a very similar motive, only served from the point of view of a deeply believing and God-fearing medieval man.

The board depicts guardian angels who take the souls of the righteous from the afterlife into the light of the kingdom. They deserve eternal bliss with their lives, it is time for them to leave the darkness and get into another world where they will find peace. This light is the goal of the whole life of the righteous.

The picture is a board made in dark colors. Her background is quite modest, even concise. It reads only grayish clouds, light as smoke. The more vivid and more expressive the tunnel looks – a deep, voluminous, full of groundless light filling it. It is depicted by all the rules of perspective, which contrasts sharply with a rather flat background. As a result, all eyes are literally confined to this light cone. At the end of the tunnel, a circle of such bright light opens that everything that exists on this side of the canvas literally dissolves in it.

The characters of the picture are several groups consisting of their angels and the souls of the righteous. Angels are winged, but not as we are used to imagining them. Bosch’s angels have pointed wings ending with black “peaks” of feathers, and one in the center of the image has wings even red. So in this seemingly peaceful picture, not everything is as kind and sweet as other artists.

It is interesting that the figures in the picture are quite small, and they are depicted with a clear desire to create depth, to convey the perspective. To do this, the master resorts to the image of the figures closest to the audience larger, and the distant ones to small ones. This gives the picture a motion effect, which is further emphasized by spiral rings in the light cone.

The color scheme is not too diverse. It is dictated primarily by the features of the image and the minimum number of characters that Bosch does not occur so often. Angels use slightly different colors, but the shades are quite bright and saturated. This perfectly distinguishes images on a dark monotonous background and deprives the picture of crowding and dullness if such terms are generally applicable to the work of this great master.