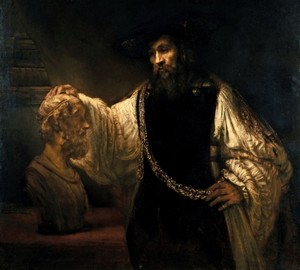 Rembrandt (1606-1669), despite the fact that he lived in Holland, did not quite fit into the tradition of her art and generally went beyond all sorts of limits. He created the work “Aristotle in front of the bust of Homer” at that time of his life, when he was unrecognized in his homeland, but became loved outside it. The Sicilian rich man and philanthropist Antonio Ruffo wished to decorate his art gallery with the image of Aristotle, and Rembrandt wrote it.

The philosopher is dressed in a 17th-century outfit – a shirt with magnificent sleeves and a vest, on his head is a velvet hat, on his chest is a silver chain with a medallion depicting his pupil, Alexander the Great. However, the chain worn by the rich Dutch of that time is much better visible than the medallion. Together, it gives the impression that Aristotle is a contemporary of the artist and easily went to his workshop. Moreover, the bust of Homer depicted here is most likely the one that was in Rembrandt’s house and appeared in the inventory of property seized from him for debts.

The figure of Aristotle is floating out of the twilight. He leads an invisible conversation with another great philosopher, and on his face is such a deep thoughtfulness as happens only in people who have touched the secrets of being. From Homer’s bust, it seems that radiance comes, illuminating his “conjectioner” and looking like the light of truth, dispersing darkness. “He was neither an exclusively religious painter,” said Belgian writer Emil Verkharn about Rembrandt, “not a creator of fantastic dramas and picturesque dreams… He was the epitome of the supernatural. Under his brush, the miracle seems to have really happened, he put so much deep, purely human feelings into him. ”.