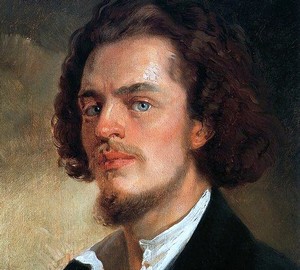 Master was born in 1839 in the family of a talented person and a good artist, Yegor Ivanovich Makovsky. The artistic environment in which he was brought up Constantine, has left its imprint on all the children of this family. The boys became well-known artists, and their sister, Maria, was an actress.

Constantine easily and successfully studied at the Moscow school of painting, sculpture and architecture. Friends of his parents were famous artists — V. Tropinin and Karl Briullov, which undoubtedly influenced the work of the master.

Constantine so successfully entered the Imperial Academy of arts in St. Petersburg, studied well and as a student began to participate in exhibitions. But academic diploma he has not got, as together with some other students began to work on paintings in the mythology of the Scandinavian countries.

The Makovsky was typical of the realistic depiction of reality, but not alien to the romantic movement and the tendency to use enough lush decorative details and elements. However, his paintings look very organic and solid, they feel solid academic training and the undoubted talent of the painter and draftsman.

Acquaintance and collaboration with archaeology logically led to the creation of some other well-known artists of the “Association of traveling art exhibitions”. These artists quickly became known as the Wanderers. Makovsky continued his series of works, which portrayed ordinary people going about their ordinary, everyday activities.

On the subject of the work and especially the artistic means of implementation of plan, colors of paintings of Constantine was influenced by his travel to Serbia and Egypt. Paintings gain iridescence, rich flavor and are often characterized by complex multi-figure composition. Master interested in historical events, which considerably idealizes in favor of a greater visual appeal.

Also during this period, Makovsky successfully wrote a large number of portraits. Among them are extraordinarily beautiful images of Maria Volkonskaya, and the wife of Tsar Alexander III Maria Feodorovna in his youth. The last picture — front picture, fully reflects the massive fascination with the aristocracy of pseudo-motifs. The rich decoration of the Queen and her tiara is very reminiscent of the kokoshnik, demonstrates the highest skill of the artist.

These same features are also characteristic of other works by the master, depicting the Russian people of past eras. They are very idealized, but very beautiful and attractive, expertly executed.

The life of a talented artist suddenly interrupted. 76-year-old master died when his crew got hit by a tram. He left us many beautiful paintings that demonstrate his high level as an artist. In his paintings left an entire era, of rapid and vigorous, the time of establishment of new Russian art, and created memorable, epoch-making paintings.