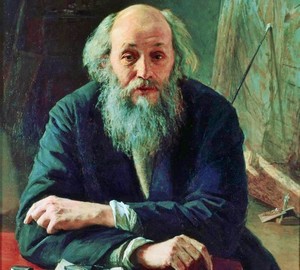 Nikolai GE – Russian painter, portraitist, draughtsman, Creator of numerous paintings on historical and religious themes. He was born in Voronezh in a landowning family. Its somewhat strange to the Russian ear the name due to the origin. Great-grandfather Nicholas came to Russia, fleeing the French revolution. His name was Mathieu de GE, he was a nobleman who married a Russian woman and served his new country faithfully.

The beginning of life of the future artist was marred by tragedy. When the boy was only three months, from cholera, his mother died. Raised him to the joint efforts of grandma and fortress babysitter. Early life Nicholas were held in a comfortable and rustic environment. Subsequently, the boy was studying in a private school, and then in the gymnasium of Kiev. His artistic talent was noted early enough, but at the end of secondary school the young man entered the University of St. Vladimir, the physics and mathematics faculty.

He moved to his elder brother in St. Petersburg, Nikolai continued his studies at the Imperial University of the city at the same faculty. However, the desire to become an artist won, and he left school, enrolling in the Imperial Academy of arts. There he studied under the academician basin.

During his studies for his paintings the young master gets a Small gold medal, getting married, and then becomes the owner of a Large gold medal. This opens the way for him abroad, where he is serving in 1857 together with his wife. The couple visited Germany, Switzerland, France and Italy.

In 1861, the artist painted “the last supper”, which made a splash, caused confusion and was bought by the Emperor’s personal collection. It was a confession. Nicholas became Professor of the Academy of arts and was elected a full member of the Academy (not having received the title of academician).

Three years later, the master returned to Italy, where he created many works on religious themes. There he met Herzen and his portrait, which was very dangerous and brave step, since Herzen was a political criminal, a fugitive.

The pictures painted in Italy, found no response among the Petersburg public. After returning home in 1869, GE participates in the activities of the Association of traveling exhibitions. For the First exhibition he has created a monumental painting “Peter I interrogates Tsarevich Alexei in Peterhof”. The painting was a revelation to the public and were purchased in the collection of the Tretyakov gallery.

The next 6 years, called the biography of the artist, “St. Petersburg period”, was created the most famous portraits of famous people of the Russian Empire, as well as several paintings on the theme of Russian history.

In 1875, the artist left the capital and bought a farm in the Chernigov province. Few years ago, he wrote, as he rethought his life from the point of view of religion and morality. During these years he tried to live a simple rural labor. But the money he was missing, which led to the creation of a series of custom-made works designed to bring livelihood.

Quest masters in the field of religious painting was perceived in bayonets inert audience, and especially such institutions as the Holy Synod. A number of his paintings were considered blasphemous and offensive to the feelings of believers, but the artist was satisfied.

A year before the death of Nikolai GE wrote a self-portrait. His works are kept in many museums of the world and Russia, including the famous Tretyakov gallery in Moscow, and contributions to religious paintings is considered a significant achievement of realistic art.