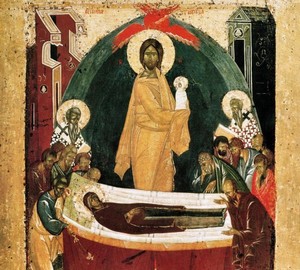 Assumption – Theophanes Greek. 1392. Wood, egg tempera. 86×68
The outstanding painter of the XIV century, Theophan Grek, was a deep psychologist, “philosopher,” as his contemporaries called him, an artist of uncontrollable temperament. His works are striking in the power of feelings, the passionate excitement of images. Theophanes Greek is a native of Byzantium. Being a mature, established artist, he had a huge impact on the development of Russian art.

The beginning of his activity in Russia is connected with Novgorod. Here, Theophanes Greek, one of the greatest masters of monumental painting, performed magnificent frescoes, for example, in the Spaso-Prerazhensky Cathedral on Ilyinsky Street.

Theophanes Grek moved to Moscow at the end of the XIV century – during the construction of the city as a regional center. Here he worked on paintings of Kremlin temples, wrote icons.

Theoofan brush has a wonderful two-sided icon. On one side it depicts “Don Mother of God”, on the other – “Surf”.

The Assumption captures the death of Mary. In the performance of Theophan Greek, the stage from the legend acquires extraordinary significance and diversity. With the ability characteristic of an artist to philosophically comprehend the meaning of the performing, he builds this traditional composition.

The Mother of God lying on a light bed in dark cherry clothes personifies the greatness and severity of death, its eternal peace. A clear, continuous line denigrates the artist’s figure of the deceased. In an energetic movement, as if striving up, a huge Christ arises over Mary, a deity who has accepted her soul and ascends it to heaven. It is depicted against the background of a dark blue halo – a celestial sphere that is crowned by a bright red seraphim with open wings. In contrast to the mighty, inner-force figure of Christ, the apostles at the bed of Mary seem small and weak. Their faces and gestures express confusion, fright, pity, a person’s impotence in the face of death, and even her misunderstanding. A group of apostles strikes the vitality of the types. The trepidation and liveliness of the image are given by light glare, quickly applied by the artist to the faces and fabric of clothes.

The “sensience” of Theophan of Greek is a work of high drama, the depth of thought and genuine humanity.