“AT. AND. Lenin in Razliv in 1917 ”, Arkady Alexandrovich Rylov – overview of the painting 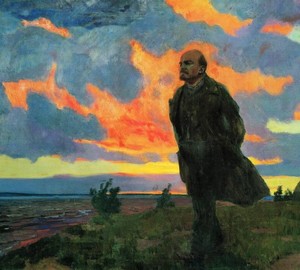 AT. AND. Lenin in Razliv in 1917 – Arkady Alexandrovich Rylov. Oil on canvas. 126.5 x 212 cm
Picture “B. AND. Lenin in Razliv in 1917 ”wrote by Arkady Alexandrovich Rylov in 1934. The artist supported Soviet power, was a supporter of the revolution and Marxist-Leninist ideology, so it is not surprising that he was able to so talentedly convey the image of the leader of the world proletariat.

The painting was created in two versions, very similar to each other, and both canvases are stored in the State Russian Museum.

Compositely, it is a portrait of Vladimir Ilyich against the background of a fiery sunset and a saturated green river coast. As usual in the paintings of Rylov, the colors are extremely bright and contrast, the sky plays with all possible shades and nature strikes with restrained splendor.

Getting ready to write a portrait of B. AND. Lenin, so significant for the Soviet audience, Arkady Alexandrovich made numerous trips to Lake Razliv. He looked at this area from the shore and from the boat, sailed to the place where the hut stood. But the artist decided not to portray the temporary home itself, because, according to him, a stamp from the history textbook would have been obtained. Therefore, Lenin is depicted walking along the shore, immersed in thoughts – as Rylov himself said, “to meet the storm.”.

As you know, in 1917 the ideologist of Soviet power hid with G. E. Zinoviev from the Provisional Government and was in mortal danger. Some sources indicate that when discovered, he had to be shot on the spot. And only near the Razliv, where local workers held armed self-government, he might not have discovered his location. According to the artist, Lenin is captured on the canvas at a time when he is waiting for a comrade arriving from the city with news. And his excitement, the drama of the moment, is well felt in the windy landscape with the darkening sky and the tense pose of the hero.