At the door of the mosque, Vereshchagin, 1873 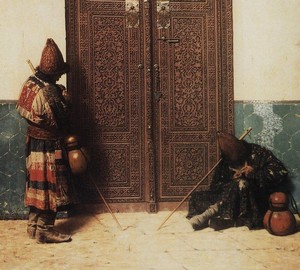 Vasily Vasilievich Vereshchagin is a unique painter who traveled a lot, accompanied the Russian army in hostilities in the Balkans, Central Asia and Japan. Having dedicated his work to the battalion genre, the artist, in addition to military events, tried to capture the views of India, Japan and other countries, to present their exotic and color to the Russian public.

The painting “At the Doors of the Mosque” is a vivid example of illustrating the mores of the eastern states, correctly marked with the keen eye of the master. The luxury of carved doors personifies the wealth of the owners of the house – rulers and dignitaries – and their contempt for the poor sitting under these closed doors. Equally, the artist fought against personal violence, evil and injustice, occurring by the will of people. The main theme of Vereshchagin’s works was the cruelty and meaninglessness of wars initiated by different states, and the reputation of “fighter with war” was firmly established, for which in 1901 his candidacy was nominated for the first Nobel Peace Prize. Seeking photographic accuracy, the painter always relied on the truth of the fact: “It is impossible to give society pictures of a real, genuine war, looking at battles from a beautiful far away.”.

Therefore, the master became a participant in all hostilities and tried to convey the battle that took place on the field as believable as possible. The artist’s life tragically ended in a exploding battleship in 1904 during the Russo-Japanese War.