“At the door of the school”, Bogdanov-Belsky – overview of the painting 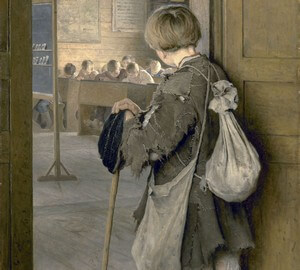 At the door of the school – Nikolay Petrovich Bogdanov-Belsky. Oil on canvas.

Peasant children and a rural school are a favorite topic in the works of Russian artist Nikolai Petrovich Bogdanov-Belsky. He did not stop drawing children all his life, they were at the core of his work, he always considered them smart, unbiased and very sincere.

The painter himself “left the people”, the son of a poor laborer, but was able, thanks to his hard work, fortitude and “happy star” in the form of a teacher Rachinsky, to become a world-class painter, whose work is still in demand.

The picture “At the door of the school” can be called autobiographical for Bogdan-Belsky. Perhaps once like this, the boy Kolya himself stood on the verge of a rural school class in the village of Tatevo. I noticed his abilities and helped in his future life Rachinsky Sergey Alexandrovich.

This is a very educated person of his time, a mathematician, a nerd, a professor, but most importantly – a teacher with a capital letter. At personal expense, he organized public schools so that simple peasant children could learn literacy, mathematics, Church Slavonic writing and other sciences. But most importantly, the children learned trust, reciprocity and friendship between students and teachers. Bogdanov-Belsky was lucky, he spent two years at the Rachinsky school. And this period forever left a mark in his life.

He has a series of works dedicated to school and schoolchildren. The work “At the door of the school” is one of those. A boy who comes to school is depicted by an artist from the back, facing the class.

Very bad clothes are striking – a torn little body, broken bast shoes, pants as if consist of one thread – “hole on the hole.”. Behind the back is a road bag, over the shoulder of a peat, in the hands of a stick-dry, it can be assumed that the boy was walking from afar. Perhaps a shepherd or an orphan whose craving for knowledge has overpowered fear of the unknown.

But now, when it remains to take another step, he stopped at indecision. What is there, as they meet, is it not for nothing that he has come this way? A bright class of elementary rural school, on the wall a geographical map, reproduction of paintings, icons in the corner, a school board, behind the desks of students whose faces are addressed to an unexpected visitor.

All this for the boy is the temple of science, it remains only to gain courage and cross the threshold. But the timidity and embarrassment of his poor clothes overcomes. So the teacher turned and looks at the guy. Who is who distracts from the lesson?

We believe that the peasant boy has enough desire to touch this unknown world, learn to read books, just like these guys in the class, learn to see cities and rivers on the map, become part of this atmosphere, called the Rachinsky school. And he will take that step.

Considering the picture “At the door of the school”, there is hope that this boy will do as well as at one time at Bogdanov-Belsky. The artist always believed in the talent and darovity of ordinary Russian people, and especially children whom he loved with all his heart, admired and was able to convey these feelings in his works.