At the opened window, Konstantin Egorovich Makovsky – overview of the painting 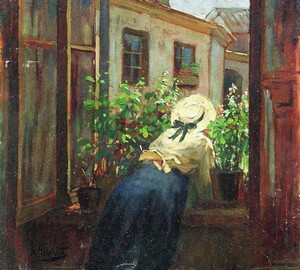 The many-sided and multifaceted Konstantin Makovsky could be either a dry academician to follow Brullov, then a social convict like Perov, or even a detailed portrait painter, who was honored by the emperor himself and his associates. In this work, Makovsky can be compared with a romantic impressionist, like Renoir, who subtly feels and hears the mundane plot.

In the picture, a girl in a fashionable hat with an elegant ribbon that opened a large wooden window, leaned out to look at the courtyard, and maybe someone could click or watch something that caught her attention. We see heroine only from the back, and therefore we can’t say anything about her appearance, however, this does not mean at all that she does not want to be considered. On the contrary, Makovsky so filigree depicted the play of sunlight on her beige hat and blouse that you involuntarily begin to admire these glare.

Green flowers in pots deserve a separate word. Among artists, green is considered very insidious – a bright shade of green is very difficult to harmonize on the canvas, but Makovsky manages it filigree. Fresh, saturated green color became his kind of business card, and he boldly used it in his work.

The picture seems to us sentimental and somewhat intimate, and its creator is an observant, romantic person and, of course, incredibly talented.