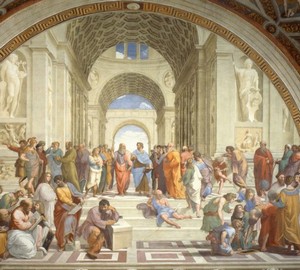 Working on the Athens School is a fresco on the subject of philosophy. Raphael depicted a fantastic temple, the main nave of which goes into the blue distance next to vaulted arches, and placed ancient philosophers and scientists in its space. The center depicts Plato pointing to the sky, which, he believed, defines all human life, and Aristotle, who extended his hand over the earth. To the left, actively gesturing, something explains to the students of Socrates with a cool one, stubborn forehead, below Pythagoras writes in a book, where the people around him look with curiosity, Heraclitus Ephesus froze with a pen in his hand, immersed in his thoughts, Diogenes reclines in a relaxed position on marble steps, on the right, bending over to the plate, writes his formulas Archimedes, behind him talk Strabon and Claudius Ptolemy. In the last group, Raphael depicted the ancient Greek painter Apelles in a dark hat looking at the viewer, giving him his own features.

On this fresco you can find other portraits of contemporary artists: Plato resembles Leonardo da Vinci, and Heraclitus – Michelangelo, and they are written in the manner of each of these masters. The figure of the first is harmonious, like the paintings of da Vinci, it is balanced and enclosed in an invisible oval, and the face expresses calm. The second sits in a complex, “cooled” pose, the burning of restless thoughts is felt in it, its appearance sends the viewer’s imagination to the huge fresco that Michelangelo then created in the Sistine Chapel: this figure resembles the prophets from the plafon. Thus, Raphael seemed to wink at his eternal rival, once again emphasizing how much the world brotherhood of artists is.

Despite the abundance of characters, also divided into groups, the Athens School gives the impression of the unity of the depicted. Raphael alternates with static and dynamic poses, the whole composition goes in a circle, it is closed by a bright, slender architecture filled with air. But the “lovers of wisdom” are united by a common mood: all of them, each in their own way, seek truth that should triumph in human life just like the light arches of the temple of philosophy and the blue sky rise above the heads of thinkers.