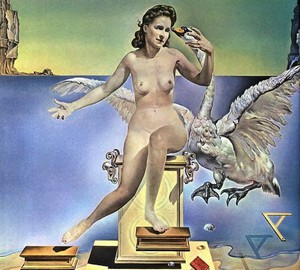 Atomic Leda – Salvador Dali. 1949
After the atomic bomb exploded in 1945, Dali became interested in the physical nature of the atom, whose particles, as you know, do not touch each other. With this fact, Dali was especially amazed: from his youth he did not tolerate physical contacts with anyone and made an exception only for Gala. The similarity of his own sensations and the structure of the atom surprised him.

On the same principle, the master built the composition “Atomic Leda” (1949, the Gala-El Salvador Dali Foundation, Figeras), in which nothing concerns each other.

Leda is the wife of the Spartan king Tindaray. The Thunder-haired Zeus, struck by her beauty, appeared before her in the form of a swan on the Eurot River and took possession of her. After that, Leda gave birth to twin heroes – Castor and Polidevka and her daughter – Elena the Beautiful. The plot of the combination of Zeus with Leda was used in their now-lost works by the great da Vinci and Michelangelo.

In the image of the Spartan queen, of course, Gal. In general, Dali considered himself with his wife as divine brother and sister, but here she personifies his mother (with Castor and Polydevk Dali correlated himself and his deceased brother).

Regarding the sea, which is not related to the land, the author wrote: “So, in my opinion, one of the myths about the union of the divine and animal is projected onto the plane of imagination and vice versa.”.